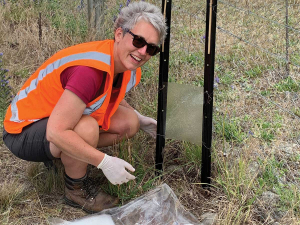 Xylella fastidiosa (X. fastidiosa) is transmitted by obligate xylem-feeding (i.e, only feeding on xylem) insects which spread the bacterium by uptaking it when feeding on an infected host plant, and pass it on to the next plant. Insects such as sharpshooter leafhoppers and spittlebugs are known to be vectors overseas. One key insect vector in grapevine is the glassy-winged sharpshooter, which is not present in New Zealand. This insect is also on the New Zealand Winegrower’s (NZW) most unwanted list. Spittlebugs are present in New Zealand, and the status of cicadas as vectors of X. fastidiosa needs more research.

The research project will advance the understanding of endemic and native insect vectors in New Zealand that could potentially transmit X. fastidiosa. In New Zealand, only spittlebugs and cicadas are obligate xylem feeders, reducing the number of insect species to focus on in this project.

The project aims to deliver new knowledge on the distribution of potential endemic insect vectors of X. fastidiosa, as well as their host plants, seasonality, and movement between the native and productive estate, using vineyards (Canterbury and Hawke’s Bay), summerfruit (Otago) and citrus orchards (Kerikeri) as case studies. The project team may also undertake gut content analysis of xylem feeders to determine what plants they have been feeding on, and tracking of adult cicadas in the native estate to establish any patterns in their movement. The information obtained through the research will be incorporated into the Ministry for Primary Industries (MPI) and Department of Conservation (DOC) risk assessments and industry response plans for an incursion of X. fastidiosa. This will have short and long-term benefits for New Zealand’s biosecurity system, informing where to concentrate early detection surveillance efforts, and where it might be necessary to manage imports of certain plant species for a more efficient response to a potential X. fastidiosa incursion.

Sampling in the field consists of sweep netting, beat sampling, and the use of sticky traps and intercept traps. Any insects collected during the netting and beat sampling process are put in plastic zip-lock bags. In the laboratory, spittlebugs and cicadas are separated from the other insects, individually placed in ethanol and identified to family, genus, and species level where possible, or sent for identification by the MPI Plant Health and Environment Laboratory. Some of the spittlebugs and cicadas are used to develop molecular identification techniques for these insects. Sticky traps and intercept traps are send to the laboratory at PFR Lincoln, where spittlebugs and cicadas caught are counted.

The scientists will use the data from field and laboratory experiments for modelling spread of the spittlebugs and cicadas in different landscapes. Using scenarios the project team hopes to understand the risk profiles for these landscapes and inform MPI, DOC and horticultural industries.

Pierce’s disease is a disease of grapevines that is not present in New Zealand but could be imported through infected plant material. The disease is caused by the bacterium X. fastidiosa, which multiplies in the grapevine’s xylem vessels, clogging them and preventing the plant from transporting water from roots to canopy. This results in stunting, dieback, and eventual death. Pierce’s disease is fatal to grapevines, killing mature vines in a period of one to three years after infection. Once vines are infected, there is no way to treat the disease.

As well as grapevines, X. fastidiosa has at least 370 known host plants, several of which are economically and culturally important in New Zealand. Consequently, New Zealand has strong biosecurity measures in place, seeking to prevent the entry of X. fastidiosa into the country