Getting Set For The Future 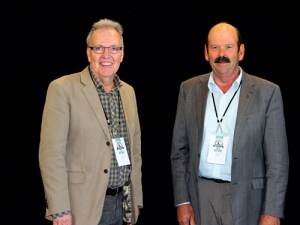 In May this year you will be asked to decide whether the proposed changes to New Zealand Winegrowers governance structure gets the green light.

This is the last step in a process that was started over 10 years ago. We believe now is the right time to complete the organisation reform.

Although the New Zealand Grape Growers Council and Wine Institute of New Zealand have worked as one body (New Zealand Winegrowers) successfully for 12 years, the current arrangement of three organisations (NZW, NZGGC, WINZ) is less transparent and accountable than desirable. In particular, members do not directly elect directors to the NZ Winegrowers Board.

To test the appetite for change, last year we sought your feedback on various governance options for NZW. John Clarke, Philip and I visited nine regions in September last year and met over 150 of you. Over 100 members made submissions, and we received personal submissions from a number of you.

As a result the Board has now developed a Proposal for the future structure and governance of NZW as a single, unified industry body. Read on for a summary of the key changes…

Changes to the way the Board is elected

If the Proposal is successful, it will change the way you elect your Board members. The current system is based on representation of growers, and of small, medium, and large wineries on the Board - there are seven WINZ and five NZGGC Directors. Under the Proposal, the distinction between growers and wineries will disappear. All levy payers will be considered ‘winegrowers’ and all winegrowers will get to vote for all directors.

The Proposal requires a change in thinking regarding the electoral process. There is no guaranteed representation for any group in the industry but you will get the chance to vote for all members on the Board, unlike the current structure where you can only vote for directors that fall within your category.

All members will get two votes if the Proposal is adopted. Votes will be cast in the ‘member class’ and the ‘levy class’. The Board believes that the two vote system will generate a Board representative of the industry.

A direct result from your feedback is the provision to appoint up to two Board-appointed (independent or not) directors to the Board. They could be from within the industry to fill a space where there is believed to be a need for someone with particular interests, or from outside the industry to supply a specific skill set.

We are proposing to introduce a Regional Membership Council to advise and support the Board. It is envisaged the Regional Membership Council will meet at least once a year or more if needed. The Council will comprise the Chair and Deputy Chair of NZW and representatives from each regional organisation. It will be a vehicle for ensuring regional concerns can be brought to the attention of the NZ Winegrowers Board via the Chair and the Deputy Chair, and also a way for NZ Winegrowers to raise and explore matters with regional organisations. It will be a mechanism to enable regional issues to feed into our strategic planning.

Changes to the levies

The major reason behind eliminating the minimum wine levy is that there is no minimum grape levy payment and this will put wineries and growers on the same level. Over 300 wineries benefit from this proposed change.

If the Proposal is adopted, there will be a review after four years. The four-year timeframe has been chosen because it enables the election cycle to be completed and provides enough time for any further change to be incorporated before the next six-yearly levy vote. After the first review there will be a subsequent review every six years.

Where to from here?

We will be visiting you in the regions in early May to provide more information and answer any questions you have. Later that month, you will be asked to vote for or against the Proposal. This is the last step in the process and will determine how your industry organisation is structured in the future.

Having a representative, accountable and modern industry organisation structured to best serve the present and future needs of our industry is incredibly important. We need your vote on this issue, so don’t leave it to others to decide what to do. Please be part of the process; your future may depend on it!

I would like to thank all of you who have contributed to the process to date. These issues are not to the forefront of our daily activity, and can be seen to be peripheral not only to your own business but even to your interaction with New Zealand Winegrowers. Your efforts in engaging with us is really appreciated.

To find out more information on the Proposal go to: http://www.nzwine.com/members/resources/governance-structure/

The past year has been a momentous one for our sector. For me the past 12 months has been marked by two stand out events.

Personalities of the year

There were a number of subjects that came up when NZW CEO Philip Gregan and I discussed this year's NZ Winegrower Personality of the Year.

In May this year, growers and wineries expressed their strong support for NZ Winegrowers Board proposal to reform the structure and governance of your industry bodies.