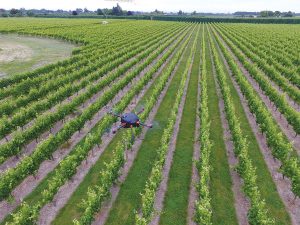 Bigger birds will remove whole berries, while others such as silvereyes will peck at the berry to get to the juice, leaving the fruit prone to disease.

At a display in Marlborough recently, representatives from Maintrac Group demonstrated some of the tried and tested as well as the newly developed bird control methods.

The tried and true:

Lightweight plastic replicas of birds of prey flapping above the vines are a good way of scaring off smaller foraging birds. As they fly in the wind like a real bird of prey, they are effective, although for larger blocks a number would be necessary to cover the entire area.

Gas Guns have been around for decades now and are still effective if used correctly. Charlie Johnson of Maintrac says the secret to success is randomizing the spacing of shots and having three shots in quick succession.

“The first shot will startle the birds; the second will make them lift off and the third will make them fly away. Also have the time delay as long as possible to stop the birds getting used to them.”

Portable gas guns that remain static are best for smaller blocks of one to five hectares, while the rotating gas gun on a tripod can cover between four and 25ha, depending on terrain.

With gas guns, growers must check for regulations of their region’s councils, as there are some strict conditions on where and how they can be used.

These use natural bird distress and alarm sounds, along with predator and harassment sounds to deter birds. Ideal for smaller blocks or areas where gas guns cannot be used. “We have a large bird sound library, so can program the sound card to target the specific bird species causing the problem in the area, this makes these units very effective. We also recommend combining sound units with predator kites, as the visual presence of a predator combined with the predator sounds, creates a very realistic and threatening environment for the birds.”

Fog Force Deterrent. This is best utilised in a preventative scenario, especially around shelter belts that harbor large numbers of birds.

“The idea is to get the wind blowing the fog across the area you want to cover and have the birds flying through the fog itself. When they are flying birds breath 20 to 30 times faster, which is why you want them flying through the fog. As they fly they breath in the fog which irritates their beak and mouth. It isn’t harmful, but it does cause pain and annoyance.”
Eventually, the birds will associate the pain with the area and leave.

Pyrotechnics. These are banger and screamer cartridges fired from a small launcher pistol. “Pyrotechnics are a safer and more cost-effective option to shooting. They are also ideal for use in conjunction with Fog Force to get the birds flying through the fog.

Handheld lasers have become an important tool in the arsenal of airports, removing birds from runways, to prevent damage to planes. The same lasers can be used successfully in vineyards. Johnson explains how they work.

“Birds see the ultraviolet light which is in the laser beam. Whereas humans usually only see the end point, birds see the whole beam as a solid object, and when this is moving around it creates a threatening area.”

Looking very much like a hand pistol, Johnson says all lasers must be treated with the same caution as you would treat a gun. They can only be sold if guaranteed to be used for industrial use, such as bird scaring.

These are probably the more likely candidate for bird scaring in vineyards. Set on a pole, the laser rotates sideways and up and down to your preprogrammed settings.

The higher you base the auto laser the better, Johnson says. Plus it works better in low light, such as at dawn and dusk – the times when birds seem to descend to feed.

Depending on the terrain, an auto laser can cover on average between 10 and 15 ha.

Assisted by a sound unit that blasts predator bird noises, the drone is one of the most effective ways of deterring birds and can be used at all times of the day.

The combination of the natural harassment noises and the random movement of the drone which can either be flown manually or pre-programmed, makes it a very effective bird deterrent.”

Johnson recommended setting a range of different flight paths, and having different patterns per block, to ensure birds don’t become immune to it. “Set it on its way, it will cover your block and come back to land when it is finished.”

Flying at 5 to 15metres above ground has proven to be the most effective scenario he said.

For those that have structures such as wind machines within the vineyard, you can geo-fence around them to ensure the drone doesn’t collide with
them.

Johnson also recommends a speed of around 30kph as ideal. “But if you have high bird pressure, you would slow your speed right down and do a couple of passes over that one area, then speed up for the rest.”  The drones can last between 40 - 55 minutes per battery charge (depending on the model of drone).

Regulations mean that unless you have permission under civil aviation rules and regulations, you need to be in visual sight of the unit at all times that it is in the air.

The sooner you start targeting birds in the vineyard the better. Don’t wait until they are having the feast of their lifetime – try and get in before the berries start to ripen.

Dawn and dusk are the best times to scare birds off, as those tend to be the most popular feeding times.

Remember that there is no one size fits all, when it comes to bird deterrents. You may need to investigate two or three in combination.