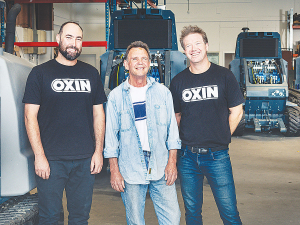 Developed in conjunction with Pernod Ricard, the tracked viticultural vehicle has been designed to autonomously conduct a variety of vineyard tasks such as mowing, mulching, spraying, leaf defoliation and trimming.

Smart Machines has designed both the autonomous technology and the Oxin platform itself from the ground up. The machines currently servicing vineyards around Blenheim are the third generation of the vehicle.

Smart Machine Chief Executive Andrew Kersley says the ambition is now for the vehicles to be made commercially available to other vineyard owners by the end of the current working season. "We're currently doing a lot of testing on defoliation and are integrating trimming as well. Those are two pretty essential tasks that make this a strong viable product for the industry to adopt. The capability of the machines with the addition of these tasks covers a significant amount of workload for customers."

Formed in 2018, Smart Machines' founding concept was to combine engineering, artificial intelligence, machine learning and robotics to address labour shortages and other challenges within the horticultural sectors. The company has not publicly disclosed the commercial costs of the Oxin, but the ambition is for the physical costs of the autonomous vehicles and implements to be comparable to a current tractor/implement setup of a similar specification.

Andrew also highlights that the multitask nature of the Oxin, resulting in fewer passes in the vineyard, brings significant operational savings, while one operator can oversee multiple vehicles carrying out pre-determined tasks across a vineyard.

The company used real-time kinematic positioning (RTK) GPS for positional data, which provides an accuracy of 14mm, while a sensor stack of cameras and light detection and ranging (LIDAR) sensors ensures safe navigation and operation while in row. “We’re monitoring over 90 parameters on the vehicle – things like pump pressures, temperatures, speeds of implement motors or defoliator heads – to understand whether things are working correctly or not,” Andrew says.

“And all of that’s being fed into an onboard computer that then makes decisions around whether the machine’s working in the right way. And if it’s not, then it stops the machine to warn the operator that something’s not quite right.”

While the power demands of the multi-role machine currently prevent the company from creating an all-electric version of the Oxin, they do have a roadmap towards an increasing number of subsystems being powered by electric motors. Andrew also notes that the Oxin’s tracked chassis results in far less soil compaction compared to a tractor carrying out the same tasks; another important discriminator that appeals to vineyard owners.

After its work with Pernod Ricard has helped validate the ability of the autonomous vehicle to perform a wide variety of heavy vineyard tasks safely, the company is now confident it can start reaching out to wider markets.

Five new Oxin vehicles are currently under build for Pernod Ricard, and their total fleet is expected to number 19 machines by the end of the year. “Their support as an industry backer and partner has been invaluable in allowing this progression. They’re a cornerstone customer and bring their deep understanding of viticulture and the practices and insights around that. That’s allowed us to concentrate on the R&D while they’ve focussed on using the machines in a productive capacity,” Andrew says.

Smart Machines is currently establishing relationships in Australia and the United States, with future exports in mind. The company is a member of the Scale for Global Growth programme, which is run by Callaghan Innovation and New Zealand Trade and Enterprise (NZTE) to help New Zealand agritech businesses pursue commercial success in international markets.

While a variety of other autonomous viticulture vehicles are currently commercially available or are under development around the world, Andrew argues that none can handle the number of heavy tasks conducted by the Oxin. “From our perspective, we 100 percent want to make sure that this tech is available on a global scale. I believe we’re leading the world in what we’re doing at the moment - I haven’t seen any other machines which are at the stage that we are, doing the amount of work that we are doing.

“We may need to adapt our tech to be suitable in international growing environments. But we’ll certainly focus on solving New Zealand’s problems for a start, and then have a look at that next step and where that transitions into.”