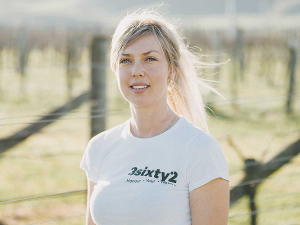 A young Marlborough producer is encouraging government and the New Zealand wine industry to take ownership of their glass recycling, before they are forced to.

“Made from natural material glass is infinitely recyclable without losing quality, reduces the need for virgin materials as well as reducing emissions from the furnace,” she says.

“New Zealand already has an effective recycling system in place for glass bottles and jars – one achieving a 62 percent recovery rate, and on track to exceed that. That’s an enviable statistic for any recyclable material, anywhere in the world.

The GPF and Rule believe New Zealand’s glass recovery rate can be even higher, and the GPF is working towards a goal of an 82 percent recovery rate by 2024.

The break in the circularity of glass packaging in New Zealand is imported glass, the capacity constraints in the supply chain and the limitations created  by customer demand.

“Imported glass not only has a far higher carbon footprint, but disrupts the circularity of glass recycling in New Zealand because those overseas glass producers are not part of the stewardship of that glass in New Zealand,” Rule says.

“One possible outcome of the current consultation on the Proposed Priority Product and priority product stewardship scheme guidelines process is the implementation of a Container Return Scheme which would see a deposit of 20 cents per bottle.

“These additional levies will no doubt hurt a lot of producers, and it concerns me that the Minster of the Environment is interested in punishing an industry with a proven record and reputation for incentivising sustainable and environmental best practice.”

The CRS scheme will only be focused on glass beverage containers, not glass jars for sauces or other products.

That is one problem Rule sees with a CRS, plus the lack of circularity where producers keep resources in use as long as possible, extract maximum value and regenerate and recover materials at the end of the product’s life.

“Norway has arguably the best CRS scheme in the world with around 96 percent return rates- but is not circular because they don’t use this waste.

“I am not against the CRS, but it is only one avenue to increase glass recycling rates and they should not be a burden to the producer.”

The $1 million already given out to research CRS could have helped improve recycling efforts at regional levels, which would be far more effective, Rule says.

“The fastest way for government to get results would be to  work with councils which have co-mingled recycling systems - where everything goes in one bin - to move away from this system to one where recyclables are sorted at kerbside.

“A good example is Tauranga City Council, which brought in a separate glass recycling system and just about doubled its glass recovery rate in a year.”

There are even larger repercussions she says, if New Zealand doesn’t take a proactive stance – and that is impact on our export markets.

“New Zealand Winegrowers need to be more proactive about our glass  product stewardship, because our largest carbon footprint is our packaging and route to market- which is not yet being regulated in New Zealand and is in other countries. Solid waste (our packaging)  is not yet being taxed or penalised, but we should expect that as an additional compliance in the coming years. It is inevitable that key export markets will want to see us comply with their waste minimisation legislation.”