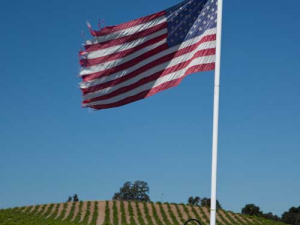 From Donald Trump's sobriety to a NZ$54,461 bottle of Madeira, here's the blog of MW Bob Campbell.

A teetotaller in the White House

Donald Trump doesn’t drink alcohol. I’m not sure what affect that will have on the US liquor lobby but Trump is unlikely to lend a sympathetic ear.

I did a little research to uncover the drinking habits of the last ten US presidents. It makes interesting reading:

• Bill Clinton - Developed an allergy to all alcohol except vodka by the late ‘70s. That didn’t affect his love for Cuban cigars.

• Ronald Reagan - Would famously drink one screwdriver and cut himself off.

• Gerald Ford - Had the odd gin and tonic. Wife started the Betty Ford Centre for alcoholism

• Richard Nixon - Nixon didn’t party, but he did hole up in the White House with some cocktails when he was at his most paranoid

• Lyndon Johnson - You think a man who nicknamed his penis “Jumbo” and ordered his Secret Service agents to routinely refill his Scotch and soda didn’t party?

Christies New York auction house notched up a world record when they sold a bottle of JCA & C 1715 Terrantez Madeira for nearly NZ$55,000, more than twice the pre-sale estimate. It was bought by Netherlands-based collector Bay van der Bunt. It joins his collection of other old bottles of Madeira which you can view at www.oldliquors.com

A representative of Christie’s auction house, Edwin Vos, had tasted the same wine in 2013, describing it as “remarkably youthful and surprisingly sweet”.

Madeira appears to be a worthwhile investment. I purchased a bottle of 1795 Terrantez Madeira from Christies London auction house in 1991 for NZ$500. The same wine is on sale through www.oldliquors.com for NZ$20,946. Sadly I drank it in 1991. It was a remarkable wine, still offering pleasure after all those years, although it was impossible to ignore the historic context as we sipped it.

My last “Campbell at Caro’s” wine tasting featured my top 10 Chardonnays tasted in 2016. I compiled the list by simply selecting all New Zealand Chardonnays tasted this year and sorting them by score, then price to identify the top 10. One or two of my favourites, such as Bell Hill, were unavailable but the list seemed to feature most of the heavyweights.

76 people joined me at Caro Wines’ Grey Lynn wine tasting room. The wines were pre-poured in the order below as the guests arrived. We tasted them in three flights (1-3, 4-6, 7-10) voting on a favourite for each flight then voted for an overall favourite. Prices shown are Caro shelf prices.

And the winner was … Sacred Hill 2014 Rifleman’s Chardonnay with Neudorf 2015 Moutere in second place and Dry River 2014 Chardonnay third.

My original scores placed the Neudorf 2015 Moutere (98 points) ahead of Sacred Hill 2014 Rifleman’s (97 points) but I had to admit that on a head-to-head basis the Rifleman’s was a very worthy winner indeed. It has great concentration, fruit power and purity with an impressive thread of mineral/struck flint character.

It was a very strong field indeed. Martinborough Vineyard earned my vote for “best value Chardonnay” – a beautifully sculpted wine perhaps without the power of the winners but very classy nonetheless and with more accessibility than many.

Gender-based marketing is not new

“Gender-based marketing is the latest buzz-word in the wine world …” is the introductory line in an interesting article in “Drinks Central” which goes on to describe wine brands that have been developed to suit either male of female wine drinkers.

That concept is hardly new. I recall interviewing Wolf Blass many years ago for Cuisine magazine. When I asked him why his company had enjoyed such rapid growth he credited much of his success to the fact that he had deliberately targeted female wine drinkers by making soft, approachable red wines at a time when reds tended to be more astringent. I quoted Blass in the opening line of my interview, “I have always liked women both as people and as customers …”

The danger of targeting specific genders or minority groups, as the article points out, is that you can alienate others. Some men, for example, might feel uncomfortable drinking a wine that was packaged to appeal to female wine drinkers. It’s a “roundabouts and swings” exercise.

Kim Crawford wines deliberately targeted gay wine drinkers when they released Kim Crawford Pansy Rosé more than a decade ago. The brand still exists although I could only find listings in the UK and US. Perhaps our population is simply too small to support a wine aimed at such a limited market? Gay tourism New Zealand estimates that there are approximately 100,622 gay and lesbian people between 16-64 years living in New Zealand which is rather smaller than the 2,258,900 males and 2,340400 females living here in 2015 (Statistics NZ).

Discover the undiscovered wines of Emilia-Romagna in one of Italy’s most beautiful wine regions. Enjoy the luxury accommodation staying at a local winery for seven nights as we explore the food and wine delights within a relatively short distance. In addition to the local wines you will experience the wines of Piedmont, Tuscany, Fruili-Venezia Guila and Puglia during regular Italian wine tastings at which you will learn more about this rich and diverse wine country.

For more information email me at This email address is being protected from spambots. You need JavaScript enabled to view it. (put “Italian tour” in the subject line)