From New Zealand to France 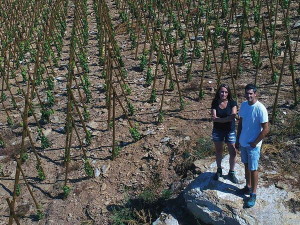 Still hard for the Botts to believe, they own these vineayrds in France.

New Zealanders Graeme and Julie Bott have created a successful wine estate in one of France’s most famous wine regions.

Nine years ago Graeme Bott completed his viticulture and wine science degree at EIT. In 2010 he moved to Côte-Rôtie in France to work for well-known Rhone wine producer, Stephane Ogier, with a specific goal in mind.

“Syrah was the variety which interested me the most which is why I wanted to discover the Northern Rhone Valley, the birth place of Syrah,” Graeme says.

This work experience led to a fairy tale-like story and an obsession for a wine that he says has no peer. Graeme became a winemaker for Domaine Stephane Ogier and worked there for eight years. Then, as life goes, he met his now wife Julie who was the sales director and their common passion in wine opened a new chapter.

Originally the couple didn’t even dream of owning their own vineyard. Land prices in the region have skyrocketed in the last 20 years, and most of the land in the famous appellations is already cultivated.

“Not to mention the fact that, to have a chance in the business here, you have to be born into a family with an existing estate or land holdings.”

Hunting for a suitable property, Graeme and Julie found a small house up the hillside of Verin. They discovered that the 3500m2 terraced forest around the house was in the Condrieu appellation. It was a now or never moment, and they had no hesitation in buying it.

They started to actively look for more unplanted land to create their own domain.

“We spent every minute analysing the appellations, areas and plots that had not yet been planted since established vineyards were unaffordable and rarely go up for sale.”

Once found they did all the land preparation and planning by hand.

Their first wines, 3000 bottles produced from the 2016 harvest, were vinified in their garage. The same happened in the following two years. However, production has started to take off with their vineyards coming into operation. At the beginning of 2019 the Botts rented a winery in Ampuis where they are currently installing their tanks and cooling ready for the upcoming harvest. The plan for the next five years is to produce 35,000-40,000 bottles a year.

Since 2015 the couple has been able to purchase 6.5ha of land, consisting of more than 50 plots. They planted their vineyards in the appellations of Côte-Rôtie, Condrieu, Saint-Joseph and Seyssuel which was hugely challenging.

All their hard work has paid off. Recently the Botts won the award for Vigneron and Terroir D’Avenir which is similar to Winery of the year/Winemaker of the future. They were selected first of all for the wines they are producing and secondly for their project having planted vineyards in the appellations around them.

“We have also planted vines in Seyssuel which is considered an exciting terroir of the future. We are part of a group of winemakers who are redeveloping this area which will shortly pass into an appellation,” says Graeme.

“Receiving this award was incredibly humbling. Building our domain in a region where it seemed impossible, especially as I’m not originally from there, still feels a bit surreal.”

There is no doubt about the fact that the Botts have found their happy place.

“What I love about France and our region is the richness of the terroir. The soils change so rapidly and that is reflected in the wines. Here, wine is more than just a passion, it’s a way of life. It’s crazy to think that wine was made from these vineyards hundreds if not thousands of years ago,” says Graeme.

“Our favourite wine is Côte-Rôtie. It’s hard to believe that we actually own a couple of small parcels here and we planted vines in this appellation. When I started my career in wine I would have never even dreamed that it would take me that far.”

French look to work with NZ

A French research organisation studying the effects of climate change on viticulture, is hoping to partner up with New Zealand grape growers, through a collaboration with the NZWRC.

The stars and stripes are in our future

Recently there has been considerable media coverage of the news that New Zealand wine has become the number three imported wine into the US, with only France and Italy ahead of us.