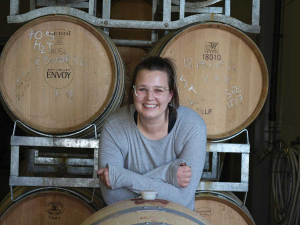 Her and husband Matt had just bought a house, life was exceptionally busy. But then at the last moment Matt convinced her she should have a go.

It was sound advice, because Emily is now the Tonnellerie de Mercury NZ Young Winemaker of the Year.

The 28-year-old who has completed harvests in New Zealand, Australia, Canada and France is currently an assistant winemaker at Spy Valley in Marlborough.

The day after the nationals, when she competed against Kate Franklin from Sacred Hill and Jordan Moores from Felton Road, the win was still sinking in.

She has a career evening to thank for her career choice. While she had contemplated studying food science at University of Auckland, coming across information about the Lincoln Viticulture and Oenology course made her change direction.

“I just loved the idea of the practical side of it,” she said. “It wasn’t just sitting in a classroom, it wasn’t sitting in a lab, it was out in the field.”

When she told her parents what she was thinking, her Dad jumped in with support. “He loved the idea, so much that he wanted to come do it with me.,” she joked.

The course was everything she hoped it would be and the end results even better.

“I love the fact that you can follow the product the whole way through and there is an actual product at the end that people enjoy. It’s a fun thing, a social thing – it’s fantastic. It’s pretty cool to share a wine that you have helped make, with others.”
This is not Emily’s first foray into the Young Winemaker competition. She entered the Marlborough regionals last year, mainly to gain confidence. Being back in it this year, was a huge growth curve she says.

“That first year it was scary, nerve wracking, but it really helped my confidence. I wanted to see this year if I could do better on the things I didn’t do so well at last year. I looked at it as a way to check my progress. It is challenging and it’s tough, but it is a very good way to see what you need to work on.”

An area of weakness that raised its head last year, was the component that covered fault finding in wines. Emily said she has worked on that over the past 12 months and has strengthened her knowledge. The other area she has built up, is public speaking.

“That is one of the reasons I entered last year, to push myself out of my comfort zone and gain confidence. Because it is important as a winemaker to be able to speak in front of a crowd of strangers.”

Not only did she have to present a speech at the competition dinner on why Marlborough is the best wine producing region in New Zealand, she also had to provide a 20-minute presentation on the subject; Is New Zealand’s wine export growth sustainable?

“Preparing that was hard work. Twenty minutes is a long time. But it was such an interesting topic and I have learned so much about the New Zealand wine industry as a result.”

The associate judging component of winning the Marlborough Regionals and the Nationals is another bonus for her. Again, nerve wracking she says, but something that she is keen to learn from.

So no regrets? “Oh no. The great thing about the wine industry is that you can do two harvests in a year, you get to see a lot of the world, and get to work and find out about the culture of the place where you are working and living. It’s a great job.”

A tradition is set

If there was ever a piece of advice to give to potential winemakers intending to enter the Young Winemaker of the Year competition, maybe it is to buy a house just as you undertake the regional competition.

That may sound ridiculous, but all of the National winners from the last three years have signed off on a house the day of the regional competition or a few days before. In 2017 Kelsey Daniels was checking with the bank in between modules at the South Island competition, as her house sale was finalised that day. In 2018 Greg Lane was in a similar situation, signing off the afternoon of the competition.

This year, Emily Gaspard-Clark had signed off just a few days before the regional competition took place. Twice may be a coincidence, but three times in a row? Tradition maybe.

It may be just a coincidence, or it could be a secret weapon – but the Tonnellerie de Mercurey Young Winemaker’s of the year in both 2017 and 2018 bought a house on the exact day they competed in their regional finals.

This year marks the 10th anniversary of the National Young Viticulturist of the Year competition.