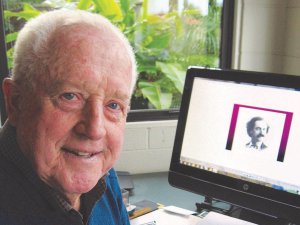 Kevyn Moore, who passed away in May, was a past president of the New Zealand Grape Growers Council (NZGC) and Chair of the Bragato Trust, which provides undergraduate, postgraduate, and research fellowships for students of viticulture in educational institutes and universities in New Zealand. He was also a 2008 inductee to the New Zealand Wine Hall of Fame. “His real legacy is memorialising the name of Romeo Bragato,” says Terry Dunleavy (MBE), inaugural Chief Executive of the Wine Institute of New Zealand and Hall of Fame committee member. “I can assure you that this was entirely driven by Kevyn.”

Over the past 25 years, Kevyn researched and wrote a comprehensive history of Romeo Bragato, who left Italy as a young viticulturist in 1888 in order to become part of Australia’s new world wine industry. In 1895 Romeo visited New Zealand for the first time, and 100 years later the first Romeo Bragato Conference was held in Marlborough.

In a 2015 story in Winegrower Magazine, Kevyn said he had an “empathy” with Romeo Bragato. “I think he was a rather restless personality. I understand where he was coming from – he was a proponent of the view that good wines are made in the vineyard and I believe that too.”

In 1995, then President of the NZGC, Kevyn sat around the table with members of the New Zealand Wine Institute, chaired by John Buck, who knew of Romeo Bragato’s pioneering work in New Zealand and raised the 100 year anniversary of the viticulturist’s first visit. “The Wine Institute were not in a position to do anything at that time as their calendar was too full,” said Kevyn in the 2015 story. “So the New Zealand Grape Growers Council picked up the baton and organised their first national viticultural conference and wine awards, naming both in honour of Bragato.”

After a trip to Italy in 2001, during which he and his wife Corinne visited the Regia Scuola di Viticoltura ed Enologia where Romeo studied, Kevyn became determined to research him, returning to Italy in 2011 and then progressing with his book, which “was 98 percent complete” when Kevyn spoke to Winegrower Magazine last year.

He also took on responsibility for the Bragato Trust, which was established in 2008 following a $380,841 bequest from the estate of Jan Colville, the granddaughter of Romeo Bragato. In last year’s interview, Kevyn said the trust – which at that point had allocated 44 grants worth $229,500 – was a lasting recognition of the foresight of Bragato.

Terry Dunleavy says Kevyn’s own foresight stretches beyond Bragato, and he was also responsible for the initiation of Winegrower Magazine in the mid-1990s. While attending an executive meeting of the Wine Institute, Kevyn raised the issue of the industry needing its own magazine, and everyone agreed, says Terry, who was swiftly designated the role of founding editor.

New Zealand Winegrowers Chief Executive Philip Gregan says there is “no doubt” Kevyn made a significant and lasting contribution to New Zealand’s wine industry. “Most of all he will be remembered for his work to memorialise the vital contribution that Romeo Bragato made to the development of viticulture in New Zealand. This legacy is best embodied in the work of the Bragato Trust, which continues to support students in the grape and wine sciences for the benefit of the industry into the future.”