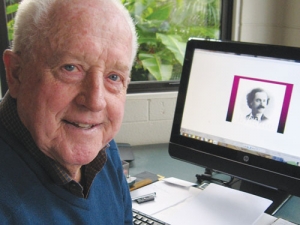 Moore, who to date has funded all the associated costs, is aiming for a 300-400pp hardback book which he believes will attract interest from both sides of the Tasman.  The biography’s working title is simply Bragato.

“I have an empathy with this man,” the retired grape grower says.  “I think he was a rather restless personality.  I understand where he was coming from – he was a proponent of the view that good wines are made in the vineyard and I believe that too.”

The idea for a book was triggered by a five-week trip Moore made to Italy in 2001.  With wife Corinne, he visited Bragato’s alma mater, the country’s leading winemaking and viticulture school, Regia Scuola di Viticoltura ed Enologia, in Conegliano.

In 2011, the couple returned to Italy for a further nine weeks.  “I was determined to research him,” Moore says of his ongoing commitment to the project. “In fact, I keep finding more.”

Moore believes that for many years Bragato was a long-forgotten visionary, with the connection lost in the wake of the temperance movement, the Great Depression and two world wars.  His name was revived in the 1960s, he says, through legendary Hawke’s Bay winemaker Tom McDonald’s efforts to make top Bordeaux-style reds.

“Prior to this time, growers had gone down the Muller Thurgau route.  Suddenly Chardonnay and classical red varieties started gaining more interest.”

Chairing the institute at that time, John Buck knew of Bragato’s pioneering work in New Zealand – his company, Te Mata Estate, was formerly a winemaking enterprise driven by the land-owning Chambers family and the vineyard was one of a number Bragato visited in Hawke’s Bay.

A link to the region had been forged through Sydney Anderson, a viticulturist who worked at Tiffen Estate in Greenmeadows, which sold to the Mission in 1897.  Anderson had been to Melbourne and spent time with Bragato.

“Bragato spent much time in Hawke’s Bay in 1903 – a La Nina Year,” says Moore, who has copied parts of Anderson’s diaries.  “He spent time with Anderson at “Tiffen Estate”.  I guess the old name stuck for a while.”

At the 1995 New Zealand Wine Institute meeting, Buck reminded the industries’ representatives that it was coming up to the 100th anniversary of Bragato’s first visit to New Zealand and he invited suggestions on what might be done to acknowledge and celebrate that.

“The Wine Institute were not in a position to do anything at that time as their calendar was too full,” Moore recalls, so the New Zealand Grape Growers Council picked up the baton and organised their first national viticultural conference and wine awards, naming both in honour of Bragato.

The conference, which dovetailed nicely with plans for an annual technical symposium to disseminate information and research results to grower members, was held in Marlborough and keynote speaker, South African Dr Johann Marais, delivered the first Bragato address.

The intent was that if the conference and wine awards proved successful, they would be held every year.  However, Moore says there was a “kicker” that followed the inaugural event.  Arriving home, he took a phone call from a very imperious-sounding woman who informed him she was Bragato’s granddaughter, Jan Colville.

“She said how dare we use the family name without permission.  We had no idea Bragato had a daughter and a granddaughter living in New Zealand!

“Sometime prior to that Corban’s, I think, used the name for labels and Miriam [Bragato’s only child] and Jan took the company to court.  That didn’t stop anyone using it but the two women had a pretty sad view of the New Zealand wine industry because of their experience with that.”

The Moores drove to Auckland to meet Miri (as she was known) and Jan, the first in a number of meetings with the women.  They learned that in 1907 Bragato had married Laura Condon, a New Zealander some years younger than himself.  He took New Zealand citizenship the following year and the couple, living in Auckland, had a daughter.  Miri married Scott Colville and they in turn had Jan, who cared for her mother in her frail old age.  Jan never married and died childless.

“That’s where they started telling us about Bragato,” Moore says of the trips he and Corinne made to Auckland to talk to his descendants.

In the course of his research, he widened his inquiries from New Zealand and Italy to Australia, Croatia and Canada, garnering new information and correcting inaccuracies that have entered the folklore that has built up around the legendary viticulturist.

The fourth of 10 children, Bragato was born in 1858 (before the unification of Italy) on the island of Lussin Piccolo, then part of the Austro-Hungarian empire.  This island in the Adriatic is now included in Croatia and is known as Mali Losinj.  Bragato, however, considered himself Italian.

Moore says Bragato wasn’t always honest about his age so when he located his birth and baptismal certificates he thought “now we know”.

The young man attended the school in Conegliano between 1879 and 1883.  Moore, who has his report cards, says that he was generally a pretty average student but achieved top marks for drawing and science.

One of the school’s professors suggested students explore the potential for winegrowing in Australia and urged them to learn English with that in mind.  Bragato was the only one in his class to take up the challenge.  He sailed for the new world in mid-1888 and was appointed Victoria’s Government Viticulturist the following year.

When he first arrived in Australia, he had another Italian man accompany him to the job interview to act as his translator.  Moore thinks this was a ploy because within months Bragato was writing reports in very lucid English for the Victorian Board of Viticulture.  As well as English and Italian, his family says he also spoke German.

Seeking information about Bragato’s work for the Rutherglen viticulture centre in Victoria, an identical building to the viticultural research station at Te Kauwhata, Moore found what he was looking for just two hours before he was due to catch his plane back to New Zealand.  He left money to photocopy the material and asked for the pages to be sent on to him.

“Everything in these buildings was done by gravity, there was no electricity to power the pumps.  The Australian facility opened in 1890 and Te Kauwhata in 1902.  Bragato designed the fermenting house and the interior of the winery.”

Bragato had spent six months in New Zealand in 1895, and it was on this visit that he found phylloxera in a vineyard in west Auckland.  In 1901 he returned, specifically searching out phylloxera infections, and in the following year he was employed by the New Zealand Department of Agriculture as the Government’s viticulturist.

He spent much of his time at Te Kauwhata, where plantings were expanded to more than 4.5 hectares.   Different varieties were trialled and those that showed promise were distributed to other regions.

Trains transported Auckland growers to the Waikato for field days and Assid Corban was among those who attended the first of these events.

Moore considers Bragato a go-getter.   Having moved from the other side of the world to pursue his career as a viticulture adviser in Australasia, he was also an accomplished winemaker, winning five medals from six wines he entered in a competition held in London in 1908.  At one stage he was a co-owner of the Esplanade Hotel in Takapuna and he also owned shares in a Waihi gold mine.

In 1909 Bragato left the Government’s employ and the family moved to Canada.  It was there that he died, by his own hand, in 1913.

As part of the “quite substantial” coverage of his subject’s time in New Zealand, Moore hopes to include two books written by the viticulturist as appendices in the biography.  These publications feature drawings Bragato did to illustrate pruning, budding and growing and techniques such as grafting.

Report on the Prospects of Viticulture in New Zealand details Bragato’s nationwide tour to assess the potential of different regions for growing wine grapes.

“He looked at soils and the weather, rainfall in particular, and compared these with his knowledge and experience of the industry in Italy.  He looked at latitudes around the world and where grapes were grown.  New Zealand he considered not too far south, nor too close to the equator.”

Among the areas he pinpointed were Nelson, the Wairarapa, Central Otago and Hawke’s Bay – “Marlborough is the notable omission among those he found suitable.”

The second book by Bragato was entitled Viticulture in New Zealand (with special reference to American vines).

Asked what Bragato would make of his efforts, Moore says he believes he would be pleased that what he imparted is still remembered and practised.

Having been to Australia twice to research his subject and spent hours in Auckland and Wellington, he says the historical records in both countries are in a terrible mess.  “As government departments change names, you lose the trail.”

Despite that, he considers Bragato to be well-known among New Zealand wine circles.

“There is the annual conference with a keynote speaker, viticulture-based wine awards, and an  exchange programme involving students from the school at Conegliano and EIT in Hawke’s Bay all honouring his name.”

Having committed so much time and energy to the project, Moore has made the decision to stop gathering further material for his book.  The text is being read by an academic at an Australian university and while the would-be author hasn’t fully determined how it will be published he hopes to see it launched at the Romeo Bragato Conference next year.

“I have so many other things on the go,” he says, “I would love to see it finished and published.”

Romeo Bragato continues to make his mark on New Zealand’s wine industry, 125 years after he first offered advice on the prospects for viticulture. The Bragato Trust granted a total of $23,000 to seven wine and viticulture students last year, with 45 grants worth $240,000 since the trust was established in 2008.

The possible future of dairy farming was displayed in Canterbury recently to attendees of the NZ Grassland Association’s 78th annual conference, held this year in Timaru.