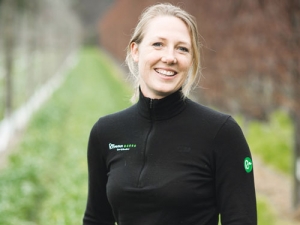 Janey Halliday, age 34 is a company viticulturist at Riversun Nursery.

How Long Have You Worked In Gisborne?

What Brought You Here?

I was coming home after a stint of working aboard so I was applying for jobs all over the country. I took a vintage winemaker’s job with Pernod Ricard to give me time to find something more permanent.  Being a South Islander from Nelson, I must admit I had to look at a map to find out where I was off to.

Where Have You Travelled In The Wine Industry To Get Here?

I finished a bachelors degree of Viticulture and Oenology at Lincoln University in 2006 and was accepted on the Matador Scholarship programme which gave me a year working in Marlborough, a season in Langhorne Creek, South Australia and a vintage in Central Coast, California.  It was my return from California that bought me to Gisborne to work for Pernod Ricard, but as much as I loved being in the winery, I knew I wanted to get back to the vineyard with soil under my feet rather than concrete.

I was offered a Viticultual technician position with Villa Maria based in Gisborne, which was lucky for me as I quite liked Gisborne.  I was with Villa for three years in which time the vit tech job expanded to include grower liaison responsibilities.  In 2012 I needed a new challenge in life so I interviewed and was accepted for the company viticulturist position for Riversun Nursery.

What Do You Enjoy Most About Your Job?

Riversun has given me challenges in spades.  As well as keeping my finger on the pulse with all things viticultural, I’m very involved in the research and development program.  I love that there is no ceiling to my job, as a company we are always trying to improve our product or processes.  Sustainability and growing responsibly has become the number one priority for Riversun, whose goal is to become fully sustainable with emphasis on organic and biodynamic practises by 2020.  This really speaks to me as a viticulturist as I believe that our biggest asset as a human race is the health of our soil, without it we have nothing.  The R&D program keeps me out of trouble researching, trialing and re-trialing new products and practices to enable us to reach our goal.

What Do You Enjoy Most About Gisborne?

Gisborne has a fabulous growing climate and has a very active and inclusive winegrowing community. Gisborne’s climate, aspect and rich fertile soils support a vast array of fruit, vegetables and stock.  Not to mention a terrific selection of wine. It has a very small community, most of whom were born and bred here. However as an immigrant to Gisborne I have found the community nothing but welcoming and friendly.

When You’re Not Growing Grapes?

I’m riding or working with my horses.  Them, my terrier, and I should mention by husband, are the constants in my life. No matter how exciting daily Riversun life can get, they are always counted on to bring me back down to earth.

You think you’re on to a winner and a trial set is looking really good, and then it gets tractor blight and you have to start again. Thankfully that doesn’t happen too often.

My favourite Gisborne wine at the moment would have to be Millton Estates Viognier, the 2013 is outstanding.  However, the wine varietal I would crawl over hot coals for is a good Italian Barbera.

Which Wine Region Excites You Most Right Now?

This is a bit of loaded question, because I have to say my own.  However, in this case it’s true. Gisborne has had some really tough times, but Gisbornites seem to be a tenacious bunch, and we’re trying really hard to re-define ourselves.  We used to be known as the Chardonnay capital of New Zealand and although we are trying really hard to re-establish that title,
we also want the world to know that Gisborne grows some fabulous alternative whites and aromatics.

Although in the scheme of things I have been working in the wine industry for a fairly short time, I’m lucky enough to be working for a company that lends itself to fulfilling any career aspirations I may have.  In saying this I would love to do a couple more vintages abroad, Italy would be top of my list.

I would love to spend some time studying ampelography with the French amelographer Jean-Michel Boursiquot.

However, more immediately I am working hard to have my young dressage horse compete at a national level and do well at Horse of Year this coming season.  I should probably try to find some time for my husband and think about starting a family at some stage too.

In order to treat more erodible land in the Gisborne district, the Ministry for Primary Industries (MPI) will implement two new improvements to the Erosion Control Funding Programme (ECFP) in the coming months.

'Over my dead body'

A weekend of wine and food

Gisborne's rebranded Weekend of Wine and Food at Labour Weekend was a brilliant success for the wineries that were fortunate to have regular bus services but disappointing for those who did not, participants say.

2015 saw the first ever Young Winemaker of the Year competition held in New Zealand.

"Everyone in the wine business knows that it is possible, but no one in New Zealand has done it to this degree."