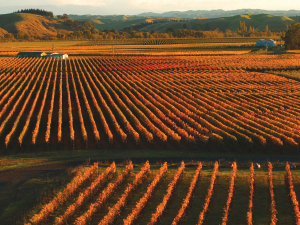 It’s high in price, small in production and set to grow following high quality grapes from the 2018 vintage.

It is Homage, the flagship wine of Trinity Hill in Hawke’s Bay.

The announcement that Homage will double in production was made by Philip Kingston, CEO Of Trinity Hill Wines, speaking at the release of the new 2017 vintage of Homage.

“We will be close to doubling the amount of Homage we make from the 2018 vintage, due to the outstanding weather, although, as the volumes are still small, Homage will continue to be a highly allocated wine,” said Kingston.

The trigger for a doubling in production was two-fold. First and foremost, the quality of grapes from the 2018 vintage was outstanding, say both Kingston and winemaker Warren Gibson.

There were also more grapes available, due to a strong quality focus in the vineyard, which is now coming to fruition.

Export and local demand were also strong for the wine.

“We are currently turning away export orders for the 2016 and the last 10 years of vineyard investment have provided grapes of the quality that Homage needs, so the time is right to increase production.”

The growth in production would also help to balance the winery’s available supply of Homage, due to the relatively small amount made from the challenging 2017 vintage, in which cool weather significantly reduced crop numbers.

One of the biggest changes to Homage was made in 2010 with the introduction of whole bunches to the ferment and a deliberate reduction of new oak influence on the wine.

“When we introduce whole bunches into the ferment, it changes the texture of the tannins and how dense it feels in the mouth,” says winemaker Warren Gibson.

In a cool vintage, whole bunches were minimal.

“This method represents fine tuning and vintage responsiveness on our part rather than a fixed long term change in winemaking methods.”

There had also been a reduction in the use of new oak used in the wine, which allowed the fruit flavours to come forward, and the type of oak used had been decreased for the same reason.

Winemakers Warren Gibson and Damian Fischer say they looked at the amount of oak and the type of oak back in 2008 when they were putting Homage into almost 100% new French oak.

“We have intentionally decreased the proportion of new oak in the wine over the last eight to 10 years and are happy with the result,” says Gibson.

The wine was not made every year. When a vintage was not considered up to scratch, the grapes destined for Homage become a lower priced Syrah.