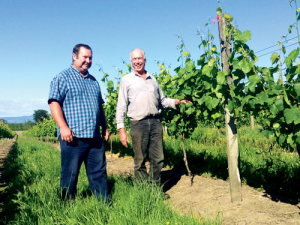 New Zealand Chardonnay has failed to make much of a dent on the export market. A group of Gisborne winemakers want to help change that.

The brainchild of Kirsten Searle (of Matawhero Wines) and driven by a group of Chardonnay-loving winemakers, the Express launch is set down for December of maybe January and coincides with a number of historic anniversaries.

It as been 50 years (or thereabouts) since large winemaking companies like Montana and Corbans began contracting landowners to grow grapes on their behalf, within just four years increasing Gisborne’s vineyard area 10-fold (from the 67 acres of 1965).

It has also been 50 years (or thereabouts) since Matawhero Wines founder Bill Irwin made the first imports of Chardonnay grapes, bringing in Mendoza Chardonnay clones to plant in his Gisborne vineyard.

It is 30 years since the Government vine pull, which provided an opportunity to replant with higher-quality grapes. And it has been 25 years since Gisborne was dubbed The Chardonnay Capital of New Zealand, celebrating the flavoursome grapes grown in the unique soil and climate conditions of the region.

It’s been a tough mantle to hold on to, especially after the last decade when oversupply led big companies to slash volumes from Gisborne growers who were at the time producing more than a third of the country’s 33,000 tonnes of Chardonnay.

But the industry has determined to develop and promote its national treasure in the way it knows best, with increasing numbers of smaller producers making quality new generation Chardonnays ripe with big, lush flavours.

And now they have a new engine to help drive them forward, in the form of the newly established Gisborne Classic Chardonnay Group, which has a membership qualification that the wine produced must be traditionally barrel-fermented and aged.

“Gisborne’s specialist producers are leaving unoaked stainless tank Chardonnay to the multinationals,” the group says on its newly-minted website gisbornechardonnay.co.nz).

Spokesman Paul Tietjen (TW Wines) says most local growers and winemakers are on board as whole Gisborne “does a lot of varieties well”, its place as a producer of Chardonnay grapes and wine appeared to have “fallen off the map a bit”.

“The way we see it, those big, oaky Chardonnays are once again very much in vogue and we want to make sure there is an awareness of how well Gisborne produces them,” he says.

“The timing really couldn’t be better: even people who moved on to drinking lighter wines are again asking for those deliciously fat, buttery Chardonnays, so this group is a way of responding to that demand.”

However Gisborne's ability to grow the dominance of its favoured grape has in recent years been steady rather than spectacular.

Back in 2009, Gisborne was producing more than a third of the country’s 33,000 tonnes of Chardonnay, a volume that plummeted after many big companies cancelled contracts and the international market started crying out for Sauvignon Blanc. New Zealand’s wine exports are worth $1.56 billion, with more than 80 percent of that being Sauvignon Blanc.

In comparison, Chardonnay, which this year made up nine percent of the country's total wine production, saw exports of just two percent.

As Villa Maria Estate founder Sir George Fistonich told the New Zealand Herald upon returning from a 2012 trip overseas, in terms of exports, New Zealand needs to focus more on promoting its lesser-known varieties to reduce its reliance on Sauvignon Blanc.

“We found people were just blown away by the quality of our Chardonnays," says Sir George, who was keen to see Sauvignon Blanc's share of the export market reduced to 50 percent to allow room for other, high-quality varieties.

And that view is backed by agricultural specialist Rabobank which, in its Wine Quarterly Q2 2016 report, reiterated the need for diversity in wine exports.

The current emphasis on lighter-bodied wines – specifically Marlborough Sauvignon Blanc – for export creates a real risk and Rabobank wine analyst Marc Soccio says it is important the industry invests in other products.

One of those could – and many say should – be Chardonnay and Gisborne growers and winemakers are resolutely passionate about making it happen.

The 2021 harvest was the latest in a run of kind harvests for Gisborne, says Matawhero owner Kirsten Searle.

Fabian Yukich is a wine industry stalwart, an environmental champion and a pretty decent concrete layer. In the first of a series celebrating Sustainability Guardians, Sophie Preece talks to the Chair of New Zealand Winegrowers’ Environment Committee.