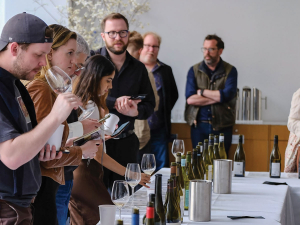 While our members were busy with the 2022 harvest, we were busy on a campaign to turn heads to New Zealand wine. Pour Yourself a Glass of New Zealand coincided with the Sauvignon Blanc, Pinot Gris and Chardonnay days all falling in the month of May. As part of this, it has been fun to make some noise around New Zealand's petition for a white wine emoji to accompany its red running mate on the world's keyboards. We've seen great media interest to date. At the time of print we had reached nine million people and been on Seven Sharp on TV1. The New Zealand Winegrowers (NZW) team has also been excited that after two long years, in person event could take place again in the United Kingdom, Ireland, United States and Canada. Read on to hear how our marketing managers got on leading New Zealand wine tastings in their respective cities.

It was a beautiful spring day in New York City on 3 May, and the local trade and media were excited to re-engage with NZW after a long pandemic-induced break. Simply and elegantly presented, a large range of New Zealand wines were offered in the private dining room overlooking the sculpture garden at The Modern, the restaurant of the iconic Museum of Modern Art. There were several major wine events happening that same day in the competitive Manhattan market, but what stood out about the guests who came to the tasting was their intense focus on the wines themselves. Many guests methodically tasted through the entire line-up of over 60 wines and took extensive notes, their astute comments and questions clearly showing their familiarity with New Zealand wines and the sophistication of their palates. Some common sentiments that were expressed by the group of retailers, sommeliers, social media influencers and wine critics were value and sustainability. Several attendees reported interest from their clients in organic and sustainable wines.

On 5 May, in downtown Toronto, NZW was joined by the New Zealand High Commissioner to Canada as we held our first live trade and media tasting in more than two years. We were one of the first countries to kick off the spring event series, with our tasting in the beautiful 17th floor Globe & Mail space, overlooking the Toronto skyline.

The room was set up as a self-pour walk-around tasting, organised by wine region, with more than 80 North and South Island producers configured to follow the north to south flow of the room. With a diverse selection of Sauvignon Blanc, Pinot Noir, Chardonnay, Pinot Gris, Syrah and several other interesting varieties, we were able to depict the complexity of not only the regions and subregions but also the strength of varieties across the country. We were also able to clearly identify organic, biodynamic and/or vegan wines, which seemed to be of keen interest to the trade. We had more than 250 top trade and media come through during two sessions, and they were all eager to embrace our environmental efforts to go paperless, learning how to use our virtual catalogue on Bottlebooks.

It was wonderful to welcome the UK trade back at a live event again with the London Trade tasting held on 4 May. We had more than 250 guests and exhibitors in attendance who were able to explore 350 wines from 83 producers from across the length and breadth of the country. There was strong attendance from the trade press and multiple retailers, and great interest in the wines, with the full spectrum of 28 varieties on show from Albariño to Zweigelt, and even a Tannat. Additional features at the fair included an organic wine bar, with 70 wines on show and a white wine feature table showcasing 16 wines. Before the tasting, Chris Stroud (NZW) and Tim Fogarty from New Zealand Trade and Enterprise presented a trade briefing to buyers and media, highlighting growth opportunities for New Zealand wine.

We also went back to Dublin and celebrated our 25th anniversary tasting there on 9 May. The event opened with a masterclass hosted by John Wilson, focusing on New Zealand white wine to coincide with the Pour Yourself a Glass of New Zealand campaign, before the main tasting with 27 producer tables and a further 10 wines available on the Organic Feature table. The show was open to 180 consumers in the evening.

Taking NZ wine to the world: Bringing the world to NZ wine

Since our last Marketing Place the New Zealand Winegrowers (NZW) Blind Tasting has become another casualty of Covid-19 postponements.

It's more important than ever that New Zealand wine stays front of mind for trade and media around the world, says New Zealand Winegrowers General Manager Marketing Charlotte Read.

Awareness and perception of 'Brand New Zealand' has never been stronger, according to the 2021 New Zealand Winegrowers Annual Report.