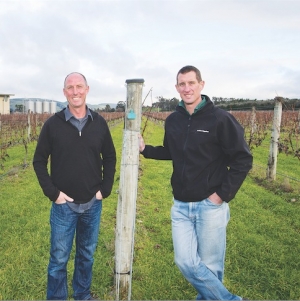 A new owner, new winemaker and new oak regime are heralding in a new wave of quality at Te Kairanga in Martinborough as Joelle Thomson discovers.

Wild, windswept and remote – and that is just the southern Wairarapa coastline, where the relaunch of Te Kairanga wines took place mid year at Wharekauhau Lodge.

On a cold winter’s day, it is also an accurate description of Martinborough; a small town and wine region with a name for high quality, generally.
Te Kairanga is one of Martinborough’s oldest wineries and its quality had taken a nose dive in recent years. Now Te Kairanga, also known as TK (because it is easier to pronounce in export markets), has had an overhaul, due to a renewed focus on both high quality and on being a Wairarapa winery, which reflects its location in the wines it produces.

The winery and the luxury Wharekauhau Lodge are now owned by North American rich lister Bill Foley, who founded Foley Family Vineyards in 1996.

The winery was founded 30 years ago, making it one of the oldest wine brands in Martinborough, but its wines had fallen from favour, says winemaker John Kavanagh, who took over the winery reigns two years ago, after Foley’s purchase of TK in 2011.

“One of those reasons was that grapes were purchased from other regions and branded as Te Kairanga wines, which sent a slightly confusing message out to fans of Martinborough wines,” Kavanagh says.

There were also issues inside the winery, which left a less than pleasant taste. Kavanagh believes he has solved these now too, thanks to months of cleaning and a complete overhaul of the barrel hall, in which he has replaced the 228 litre barrels previously used for Chardonnay with 500 litre puncheons. The new barrels remain French but because they are larger, the ratio of oak to wine is lower proportionately. This means that oak marks its flavour stamp more subtly on the Chardonnays. The Pinot Noir will remain in 288 litre barriques but the amount of oak will be significantly lower than in days gone by.

The vine age of the company’s own vineyards is a mixed bag. Although the winery was established in 1984 and many of the vineyard land dates back this far (in terms of its first vines being planted), none of the original vines remain. This is due to two main factors. Firstly, there was a change in focus from the types of grape varieties that were first planted and, secondly, some vines were planted on their own roots and had suffered from both phylloxera and leaf roll virus. The mix of varieties in the vineyards has changed and diseased vines had to be completely removed, both of which mean that TK’s oldest vines are now 25 years of age. The youngest are just 10 years old.

“I am a great believer in old vines, especially after working at Neudorf Vineyards in Nelson where I worked with grapes from great older vines. For this reason I ferment grapes from older vines separately to the younger vines in order to pinpoint the different characteristics, with a view to enhancing what we get,” Kavanagh says.

The grapes he uses also come from vineyards that represent a broad range of locations in Martinborough. There are vines directly around the winery but there is also a significant 50 hectare block at Ruakakaputuna; about 20 minutes’ drive south of Martinborough township and at 110 to 180 metres above sea level. This vineyard experiences both cooler and hotter temperatures in summer in the extremely sheltered valley in which it is planted.

“When other Martinborough vineyards are experiencing frost, the Ruakakaputuna vineyard is often several degrees above zero and experiencing its own microclimate warmth,” says Kavanagh.

To date, this hidden valley has provided a reliable steady source of grapes for what Kavanagh describes as “well priced” Pinot Noir; not top end, in other words, but of reliably ripe and consistent quality.

Kavanagh says they now hand harvest all of the white grapes; with the exception of Sauvignon Blanc.

“This is a costly exercise, but one that results in better quality wine because the flavours overall have more chance of showing at their most intense and cleanest.”

Martinborough is a small wine region that has made a large impact with its top quality wines in the past. This new era for Te Kairanga can help the region as a whole to sustain this high quality name that its best producers have forged and fought hard to retain with their wines.