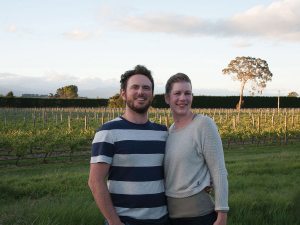 The evocative name describes how they feel about making wine from a vineyard in Martinborough that has long been regarded as one of the best sites for Pinot Noir in the region. It also pays homage to the winemaking giants they respect in the Wairarapa, including Clive Paton and Larry McKenna, among others.

The Crosby’s 4-hectare vineyard was formerly called Pahi and owned by Jack McCreanor, a Wellington doctor who bought the land - then planted in strawberries and asparagus - as an investment property in 1975. Jack and his daughters planted the land with an ad hoc mix of grape varieties, including Müller-Thurgau, Pinot Gris and Chardonnay, and did the original grafting themselves. Pinot Noir represents about 70 percent of the overall vineyard but only about half of the overall crop. There is also half a hectare each of Pinot Gris and Chardonnay.

When Jack died in 2015, Gabrielle and Braden bought the land. “We went in with the philosophy that we wanted to make one wine and make it the best we could,” says Braden, who also works as Vineyard Manager at Ata Rangi, around the corner from his own vineyard.

That said, the couple are making four wines: a dry Pinot Gris from early picked grapes, which can be challenging in terms of getting the acid balance; a Chardonnay (dry grown since 2016, as is the front original block of Pinot Noir) and also a Pinot Noir and Pinot Nouveau, which tends to be made from the Mariafeld clone - typically used to make sparkling wine due to its higher acidity, bigger bunches and larger berries.

Braden and Gabrielle also regularly invite guest winemakers to work their magic with a small portion of the vineyard. They have included Huw Kinch, Jannine Rickards and Ben McNab, formerly of Matahiwi and now at Palliser Estate.

The 2021 vintage was their sixth harvest from their vineyard and each year provides new opportunities to learn about how the vines react. “We’re constantly changing how we’re doing things,” says Braden, adding that the soil doesn’t change, but their understanding of it does. “For instance, we’re learning about how the soil is richer at this end of the vineyard and more gravely at the other.”

One of the aspects of winemaking they most enjoy has been the time given by friends and family to help with harvest each year. “It’s so humbling receiving everyone’s generosity of time, sharing resources such as barrels and knowledge,” says Gabrielle. “As a new producer making small volumes, we don’t have the resources to pour into these things easily and the generosity of others reminds us again that we are On Giants’ Shoulders.” 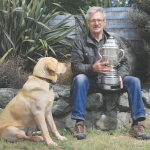 A new owner, new winemaker and new oak regime are heralding in a new wave of quality at Te Kairanga in Martinborough as Joelle Thomson discovers.