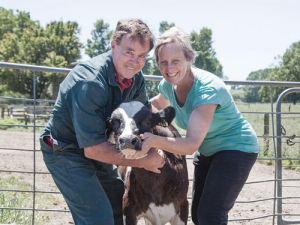 A milestone 55 years in the making was passed in a split-second: with one clamp of a tag punch LIC tagged its 10,000th sire proving scheme (SPS) bull calf.

It happened on the farm of dairy cattle breeders Stewart and Kathryn Anderson of Otewa, near Otorohanga.

The tagging of the new young bull calf signals LIC buying him for his genetic potential. He has been named Arkan MGH Believer. Now he’ll be treated like animal royalty at LIC’s Newstead bull farm.

If his resulting daughters end up high-performance in efficiency and productivity, he will ‘graduate’ to LIC Premier Sires status.

Potentially he’ll be worth millions of dollars to LIC and to the national economy by helping drive up genetic gain in the national dairy herd.

“It’s lovely of LIC to have chosen this farm to tag its 10,000th SPS animal,” says Kathryn Anderson. “It was exciting to have the co-op mark the occasion, and we felt humbled at having the honour and recognition of LIC marking the milestone here.”