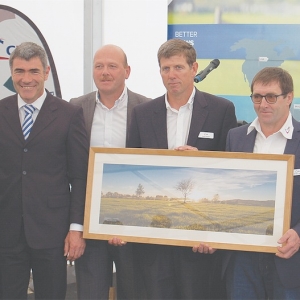 CRV Ambreed managing director Angus Haslett says the opening of a new bovine semen production and distribution facility in Hamilton marks the start of a new era for the company.

The CRV Bellevue Production and Logistics Centre, based on the outskirts of Hamilton, is a purpose-built facility which future-proofs the company with additional capacity to meet the growing demand for its bovine semen products.

The centre houses a semen collection facility, a semen processing laboratory, storage space for export and domestic products, a warehouse with farmer AI banks, and 38ha of grazing paddocks.

“The move to this new facility ensures our business continues to meet the changing needs of the dairy industry, both within New Zealand and around the world. Compliance standards are continuously being scrutinised by Government authorities, and our new facility allows us to meet the highest standards and grow our export markets.”

CRV Ambreed is part of the third largest artificial breeding company in the world with around 25% market share in New Zealand. It exports semen to South America, South Africa, Australia, parts of North America, the UK and Ireland.

Currently close to 1.8 million straws of semen are distributed across New Zealand and exported to overseas markets from its facilities each year.

“We had been operating out of our previous site since CRV Ambreed was first established 45 years ago.  As the company grew, we evolved our infrastructure to adjust to that growth, but never had a truly purpose built facility until now,” says Haslett.

“By starting with a completely new blueprint with 38ha of bare land, what we now have now is a world-class facility that sets a benchmark for success in New Zealand.”

Van Noort notes that CRV’s future strategy focuses heavily on sustainable growth, which is necessary to make investments in research and development and new innovations; new innovations that will enable CRV’s customers, dairy farmers in New Zealand, to produce more with less.

“We are very proud to open these premises.  In this location, we have everything we need to help produce more protein with less resources for the population in 2015 – in a clean way, a safe way and an inspiring way,” says van Noort.

“We provide a biosecurity level here that is unrivalled in the Southern hemisphere, and also for CRV from a global perspective.”

Haslett says CRV Ambreed received a huge amount of support from its staff at Innovation Park in Hamilton, Bellevue Holdings, the owners of the site which CRV Ambreed has a long term lease on, and the many associated contractors who assisted with site construction.

Guy acknowledged CRV for the important role the company has played in improving the efficiency of the dairy industry in New Zealand and around the world; the new facility was a big vote of confidence in the New Zealand dairy industry, he adds.

“[CRV] has a long-standing investment here in the dairy industry, I believe New Zealand farmers are the best in the world, and one of the best and biggest contributors to our increased productivity is indeed genetics.”

He has set a target of doubling the value of New Zealand’s primary exports for 2025 to $64 billion, and CRV’s expansion and focus on exports fits in well with that target.