Champion bull heads up the ramp 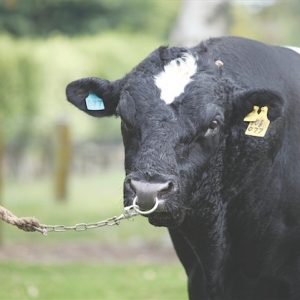 LIC's champion bull Howies Checkpoint 508077 is heading to the works after delivering his last semen.

The premature end to the bull’s stint at LIC follows two incidents within 12 months, according to a farmer advisory posted on LIC’s website by chief executive Wayne McNee.

McNee says the decision to no longer collect from Checkpoint follows a recent incident which resulted in the bull being deemed too dangerous for staff to handle.

“This was the second incident with Checkpoint in the last 12 months, so in accordance with LIC policy, he will be culled. We have a responsibility to our staff and we take these matters seriously.

“Health and safety of all is paramount at LIC, above anything else and regardless of the bull’s ranking.”

Checkpoint has made his mark on the LIC Premier Sires team since his debut in the 2011-12 season with a record 318 BW. His 866,480 inseminations make him one of only eight bulls to exceed 800,000 lifetime inseminations in the history of AB, and the only KiwiCross.

By comparison, Scotts Northsea, the only KiwiCross on LIC’s bull Hall of Fame, achieved 787,000 lifetime inseminations.

His genetics have also been exported worldwide, says McNee.

“Checkpoint’s contribution to the industry will continue, with 23 sons in the pipeline as future sires for national herd and as more of his daughters start milking.”