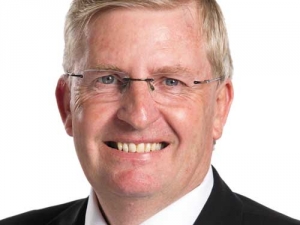 Nation, currently national sales manager at Gallagher, will take up his new role on March 14. He replaces Jon Calder.

"Peter brings a wealth of experience from his time with Gallagher Group and also his previous leadership roles with the ANZ Banking Group. Combined with his knowledge of the agri sector and the breadth of his network, he will provide strong leadership for the society and build on our success with Fieldays, Equidays and Mystery Creek Events Centre."

Nation says his new role as chief executive to the society presents a challenge in an industry he has dedicated his life to.

"NZ National Fieldays Society is an iconic organisation with nearly 50 years of history and a significant presence both on the national and international stage. The opportunity to lead such an organisation is a real opportunity," he says.

"It's hard to put into words. The society presents a lot of opportunity for growth and future developments, which is exciting to be part of. From the Masterplan site works, to the building of charitable endeavours and the continuing support of the next generation in agri-business, this is a very special organisation to be part of at a very special time."

The search for the new chief executive attracted 65 applicants. Roberts says the role was highly sought after and the quality of candidates extremely high.

"We looked across a broad section of applicants and were fortunate to have had a high calibre of potential leaders to select from."

Nation, who has served on the society's board of directors since 2004, has held the role of vice-president of the organisation since 2013.

Roberts says with recent changes at board level, and several new directors joining the society's board, the appointment of a new chief executive presents another exciting opportunity.

Peter Carr returns as a director with Roberts retained as president for another year.