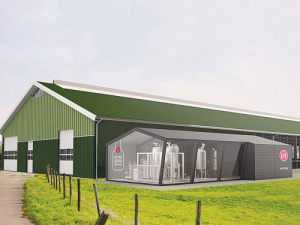 Lely hopes its Orbiter will become a feature of robotic farms around the world.

The Orbiter has been working on the Dobbelhoeve farm in Udenhout, the Netherlands for the last eight months.

From this week, the Dobbelhoeve farm and Lely are introducing a novel milk product for consumers in the Netherlands: Mijn Melk.

Mijn Melk, processed by the Lely Orbiter, offers consumers a milk whose taste is traceable to specific cow families.

Dutch consumers can buy Mijn Milk from supermarkets this week.

Lely says it partnered with VME Engineering (part of the Niras group) to develop the Orbiter. The company plans in the coming year to install a few Orbiter systems to assess direct processing in combination with robotic milking

Lely says the system processes milk directly from the milking robots to the bottle. The Orbiter concept offers new opportunities for farmers to market their own milk, support their sustainable future and to meet the demands of increasingly discerning consumers.

Lely chief executive Alexander van der Lely says the new system will offer farmers a smart way to produce fair, direct, and pure dairy products and to increase the value of their milk.

“The quality and taste of milk are safeguarded, because direct onfarm processing is much faster and offers a shorter route from cow to consumer.

“This system can process the milk of small batches of cows separately, offering the farmer flexibility and efficiency. Consumers will be able to trace the dairy products back to individual cow family level.”

The company’s aim is for farmers to increase their milk income, increase revenue from milk by adding more value, shorten the route to the consumer and choose to market the milk themselves.

The Orbiter system will get milk directly from two to four Lely Astronaut milking robots and has been specially designed to handle a low flow of milk. This enables the system to start processing the milk fast, directly after milking, by cooling it down to 4 degrees Celsius.

The continuously automated plant ensures a large capacity. The closed set-up of the system, and its few processing steps and little time between milking and processing, guarantees milk quality and food safety, Lely says.

The taste and ingredients of milk will vary according to cow breed, lactation phase, diet, the changing seasons and the choices made in processing.

With the Orbiter, the farmer chooses to process milk from any selected group of cows, with the end product and consumer in mind.