Sharemilker gets to live his dream 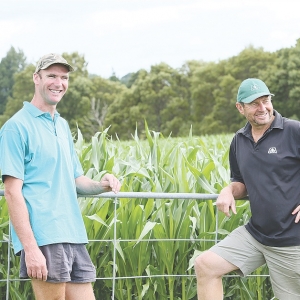 MANY BELIEVE that using sharemilking as a stepping stone towards farm ownership is becoming a thing of the past, but Irishman Bernard Kelly and his Kiwi wife Jo are following this path to achieve their dreams.

Bernard manages Noldy Rust’s farm, milking 200 cows, at Te Pahu, Waikato, but by hard work and a strong network of contacts they have landed a sharemilking job milking 180 cows near Cambridge next season.

Bernard migrated to New Zealand six years ago, lured by the vibrant dairy industry and the chance to progress. He grew up on a farm, but after ten years bricklaying his dream of getting back into farming in Ireland seemed unachievable.  “I saw I wasn’t going to get anywhere farming because it is all locked up in family farms; there is never any chance of progression. The next step was leasing a farm and you could never get the money behind you to get there. Here there were jobs all over the place, including the possibility of sharemilking. The best options were here, and even before we left we had a job lined up.”

Jo agrees they made the best choice, with the extra bonus for her being the return home to Waikato.  “Brett Worth, who farms near Putaruru, was willing to give us a job without even meeting us, a worker from Ireland with a young family, and he made us a part of his family.”

Bernard and Jo agree networking is the key to landing a good job, especially a sharemilking job. Jo says, “If it wasn’t for Smaller Milk and Supply Herds (SMASH) we wouldn’t have had the opportunity to go sharemilking.”

Noldy Rust is the chairman of SMASH, a farmer group which supports smaller herd farmers, and he tapped into his contacts to find Bernard and Jo their next job. Jo says, “There are not many bosses who would have been like Noldy, knowing Bernard wanted to move on with his career and helped him get a job. Networking is important, if you want a job you need to get yourself out there.

“For a young person SMASH events are great. If you are looking to farm a smaller herd, you get to know other like-minded farmers. You can go to discussion groups, but they can be huge farms, and Bernard knew he wanted to go small, so he needed to go and network with other small farm owners and workers.

“SMASH gets you off the farm as well. Sometimes being at home on the farm on your own all day can be lonely. With SMASH you are talking to lots of other people.” Bernard agrees, “It gives you other ways to think. Through hearing about different systems, talking to other farmers and seeing how they farm, you can gain new ideas.”

Bernard is keen to stick with smaller herd farming. He says, “I don’t want to be a staff manager, I just want to be a good farmer. Doing it by yourself you get the variety of jobs, you don’t do the same stuff all day. I like focussing on my own game and bettering myself.

“As a small farmer you have the passion for the land and the animals. We want to own our own cows, our own machinery. If it is your own it makes such a difference, you have pride in it, you look after it more, and you put more effort in as you are doing it to improve your own equity.”

For Bernard and Jo their shift to New Zealand has been the right move for them, Bernard says, “New Zealand has been a positive experience from day one. We have been helped out by a lot of Kiwis and they have opened doors for us. Everyone is supportive as soon as they see you are keen.”

To find out more about SMASH and upcoming events see www.smallerherds.co.nz