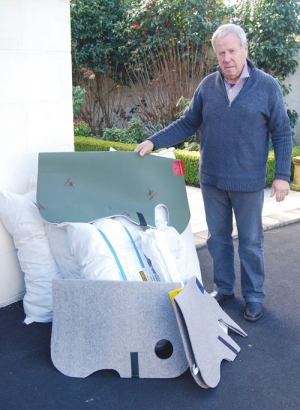 With five million calves expected in the next eight weeks, it is a busy season for Christchurch firm Woolover, which makes wool covers for calves, lambs and kids, and for adult animals.

Woolover, now exporting to 15 countries, was founded by South Canterbury ex-farmer David Brown in response to the widespread livestock deaths in the big snow of spring 1992.

Dairy News caught up with Brown at his home in suburban Christchurch where he had spent the morning taking and making up orders of covers, mostly for North Canterbury customers.

Usually orders are despatched from the factory where the covers are assembled. Woolover contracts to Christchurch companies Terra Lana, which makes the felt-like woollen fabric, Deane Apparel, which cuts the covers and Mi Woollies, which sews the final product.

Brown says his biggest market for calf covers is North America, where most dairy farmers geared for town supply, so they must calve year-round to maintain constant fresh milk supply.

He says calves might survive cold weather without covers but research by North Dakota State University showed them doing better when protected, putting on weight faster when wearing covers than control groups which did not.

The US winter can be a challenge. Some farmers raise calves in heated barns but the buildup of ammonia needs careful management, says Brown.

"You can have calves in heated barns but there is a respiratory problem with that. Unless it's monitored and very accurate it can result in calves dying. Certainly they won't grow as fast, nor will they ever reach their full potential.

"We found in our trials that you can put more weight on outside, with a jacket on, than inside in a heated barn. And the result is lower mortality, better calf health and faster growth rates."

One big customer is a specialist calf-rearer in Wisconsin which uses Woolover covers and small wind-shelters rather than barns; very cost-effective, says Brown.

Compared with other animal covers, the advantage of his design is the way it wraps under the animal's chest, with a Velcro fastening, to keep the heart and lungs warm.

The latest Woolover covers have a waterproof Teflon-based outer layer. The woollen construction enables them to breathe and keep the animal warm overnight but not too hot during the day. The covers are durable and may be re-used for several seasons.