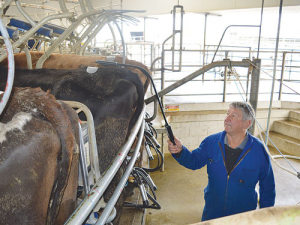 An automated RFID heat detection system developed in New Zealand has delivered the best-ever mating result for a Waikato farmer.

The system, called EstroScan, is the work of three Waikato entrepreneurs (see below). It is being developed in a joint venture with the US company MAI Animal Health.

Carl Steiner, who milks 900 cows in Ngarua through a 70-bail DeLaval rotary, has been trialling EstroScan for two seasons. He installed it in late 2016.

He told visitors at a field day on his farm this month that EstroScan has been catching more cows in heat.

“The reader picked up cows of all ages, including what we thought were [cows on] silent heat and cows which didn’t bull strongly,” he told Dairy News.

“For us the system has been a breakthrough; we are very pleased with our investment and are looking forward to the next mating season.”

EstroScan’s RFID technology is applied to the tailhead of cows prior to the onset of oestrus; the RFID chip is activated once a circuit is broken following mounting events.

Cows follow daily milking routine and while exiting the milking shed the EstroScan scanner reads the activated tags. Cows with activated tags can be drafted into the breeding pan while those with inactivated tags continue in their normal routine.

Steiner says there was a 5% gain in six-week in-calf rates and a four-day gain in mean calving date this year.

“We produce about 2000kgMS per day; four days of extra production at the current payout is worth over $50,000.”

Steiner decided to try out EstroScan two years ago, when the payout was down.

“I was thinking ‘why the hell are we buying this when there is a downturn? But I was sold on the idea.’

“I reckon EstroScan paid itself off in the first three weeks by just picking out the silent heats and improving our days in milk.”

He says EstroScan has also reduced the farm’s number of late calvers (only 40 September calvers). He used to induce at least 100 cows. The AI period has been reduced from six to four weeks and there is less stress on staff.

Steiner, who also has a 200-cow farm nearby, plans to use EstroScan there this mating season.

He will also use a newly launched EstroScan hand-held reader developed for use in herringbone sheds.

EstroScan has been in development since 2010 by three Waikato entrepreneurs: John Dawson, John Harrison and Chris Folkers.

The technology uses an RFID chip which is activated by the mounting of bulling cows.  After mountings the chip starts transmitting data -- detected using a reader board -- resulting in automatic drafting.

“In the eight years of development 18 trials have been conducted and over 5000 tags tested,” says Dawson.  “Only now are we fully confident in the reliability of both the tags and readers.

“And we now have a commercial farmer who has used it successfully for the last two seasons.”

Dawson says a major innovation this year is the development of a hand-held reader.

“This reader can be used in herringbone sheds from the pit; it is accurate and provides a lower entry cost.

“Our experience on the Carl Steiner farm has proved that these tags are very sensitive and are able to pick up young cows in particular, which may be mounted less frequently.”

EstroScan has been developed as a joint venture with US-based MAI Animal Health.

Dawson says the three developers were fortunate in finding a partner experienced in tag manufacturing and design.