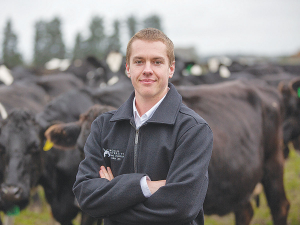 PhD student Cameron Marshall has just published two new articles in top scientific journals as part of his doctoral thesis, showing that what cows with phenotypically lower milk urea N eat, and how they eat, is important to their environmental impact.

He says inefficient N use from pastoral dairy production systems has resulted in concern regarding environmental degradation "and cows are demonised for it".

"This is a result of excessive urinary N leaching into waterways and nitrous oxide emissions from urination patches into the atmosphere. Dairy cows are demonised for it, but can be part of the solution too," he said.

The second paper found that the grazing and ruminating behaviour of cows selected for divergent milk urea N, masticate, and ruminate the pasture they eat differently, which determines their rumen function and the efficiency of N digestion and use in the rumen.

This alters the N excretion patters to the environment. Cameron's previous research has already shown that cows selected for low milk urea N had a 28% reduction in the urinary urea N loading rate per urine patch than cows with higher milk urea N breeding values.

"The results of this new research indicate two promising tools that temperate pastoral dairy production systems can use to reduce N losses and ameliorate the negative impact on the environment."

Cameron's research is showing promising results of using an animal-based solution in conjunction with dietary management strategies to reduce the environmental impact from dairy farms in New Zealand.

A greater number of mastications and chews in low MUNBV animals may result in a steadier inflow of more fermentable ingesta and digesta to the rumen, respectively.

This in turn may add to and help explain differential rumen function and nutrient supply to the host animal, which could help elucidate different observations in phenotypes previously reported for grazing dairy cows divergent for MUNBV.