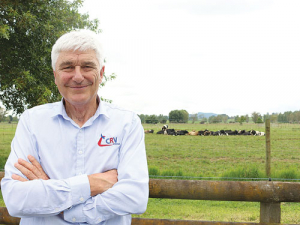 New Zealand's 4.8 million milking cows excrete 1000 tonnes of nitrogen a day in their urine, and 200 tonnes of this end up in groundwater, says CRV Ambreed.

Farmers could be using the milk urea concentration (MU) value on their daily bulk milk reports to calculate the amount of nitrogen their herd is excreting in urine and take steps to address that, says Phil Beatson, the company’s head of R&D.

He says the 200t/day that ends up in ground water “is an issue we must address now”.

MU is an indicator of how much dietary nitrogen (consumed by the cow as plant protein) is not being used for production and is excreted. Nitrogen excreted in the urine is particularly important because the high concentration of nitrogen in urine coupled with the small area of the urine patch means the plants and soil cannot cope with the nitrogen, and across all NZ about 20% is leached into groundwater.

Beatson uses an example of a herd of 500 cows whose bulk milk MU on a day is 30 units, combined with the best estimate of the MU-UN relationship of 7 grams urinary nitrogen per unit of MU. On average, each cow is peeing out 7 x 30 = 210 grams urinary nitrogen and the herd is excreting 500 x 210 grams = 105,000 grams nitrogen in urine per day, a total of 105kg a day on that farm.

He says the effective way to deal with the nitrogen leaching issues is to reduce the amount of nitrogen hitting the ground, and that means changes in the way we breed and feed cows.

This means that the bulk milk MU is a good predictor of urinary nitrogen on a per cow basis, and, when we multiply by number of cows, on a per herd basis, he says.

While the average NZ herd sits around the MU 30-unit mark, some herds have a much lower average MU and some have much higher average MU.

Herd improvement company, CRV Ambreed becomes CRV as the Dutch company brings together all its global business units under one brand name.