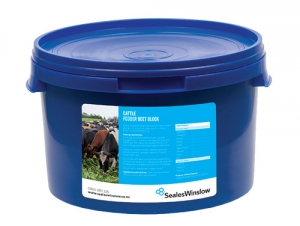 Fodder beet is an increasingly popular winter crop for beef and dairy cattle due to the large amounts of dry matter it produces.

But stock won't get the best out of the crop if its nutritional gaps aren't managed, warns product development manager Jackie Aveling, of SealesWinslow.

Its high sugar content makes fodder beet very palatable to stock, but it has sub-optimal protein content (13%), low fibre levels (<20%) and is low in phosphorus, magnesium and essential trace elements.

"At SealesWinslow, we've found a way to overcome these issues with a solution that's easy to use and which provides good nutritional support for stock grazing on fodder beet," says Aveling.

The new block addresses phosphorus deficiency and balances other minerals like magnesium and essential trace elements that are lacking in cows and heifers on a fodder beet diet.

"A diet deficient in these minerals, particularly phosphorus, can lead to 'creeper cows' in the short term, and longer-term difficulties including poor milk production, reduced appetite, weight loss and poor reproductive performance.

"Current practice to reduce the chance of phosphate deficiencies developing in stock grazed on fodder beet is to dust the crop with dicalcium phosphate (DCP) or use a slurry of the compound on silage or straw. However these practices can be dusty, time-consuming, wasteful and the intake is variable."

The new Cattle Fodder Beet Blocks come in 25kg tubs which are simply placed at the crop face under the fence in front of the cows.

It also compares favourably with the price of a single intravenous downer cow treatment. The recommended block to cow ratio is 1:25.