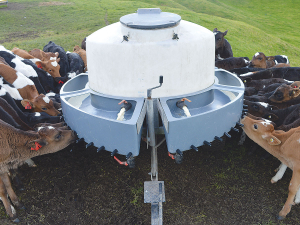 Ensuring calves get enough colostrum early in life helps their health and productivity.

A new-born calf’s immune system is immature, so calves rely on antibodies in colostrum for protection while their own immune system matures.

About two thirds of calves in New Zealand don’t get enough good quality colostrum as new-borns (including calves left with their mothers for the first 24 hours of life), and this is an underlying cause of most scours outbreaks. You can figure out how well your farm is doing at managing colostrum by asking your vet to blood test around 10 healthy 2-7 day old calves.

After drinking colostrum, a new-born calf can absorb the antibodies directly from its gut into its bloodstream. The antibodies circulate in the calf for weeks to months while its own immune system matures. A good way to remember these colostrum management guidelines is to think of the 3 Q’s: Quickly, Quantity, Quality. Here’s some more information about each.

A new-born calf’s gut allows the antibodies in colostrum to pass into the calf’s bloodstream; but by 12-24 hours old, it can’t absorb any at all. This change is called “gut closure”. So, enough colostrum must be fed quickly: in the first 12 hours of life.

You can make sure calves get colostrum quickly by picking them up from the paddock twice a day, or more during bad weather. Bottle feed or tube every calf as soon as possible after pick-up, or in the paddock if you only pick up once a day.

To get enough antibodies into its blood, a calf needs to drink 10-15% of its body weight in decent quality colostrum before its gut closes. For most calves, that means 4-6 litres. Ideally, this should be delivered in two feeds a few hours apart, but if necessary, most calves can safely be tubed 3-4 litres of clean colostrum at once.

Ensuring calves get enough colostrum early in life also influences their health and productivity all the way into their adult life! In a 2005 case study calves which received 4 litres of colostrum at birth gained 230g/day more live-weight, had 40% fewer veterinary costs, and yielded 9-13% more milk in their first lactation than calves which received 2 litres2

Two factors determine colostrum quality: how clean it is, and how many antibodies it contains.

The cleanliness of colostrum is important because bacteria can interfere with the calf’s ability to absorb antibodies, and they might make the calf sick before the antibodies have had a chance to work.

To get the most antibodies as possible into calves before their gut closes, only feed new-borns the highest antibody colostrum you’ve got. This will be from the first milking—the “gold” colostrum, since antibody levels drop at each milking after calving.

If you have enough “good” gold colostrum for new-borns, feed your poorer quality gold colostrum and all your transition milk to older calves. It’s still a great source of nutrition and it provides some short-term protection against scours-causing pathogens at the gut level.

The logistics of colostrum management can be difficult when you have dozens of cows calving every day.

But, keeping the 3 Q’s of colostrum management in mind, and spending extra time and effort on new-borns will help prevent headaches in the calf shed this season, and will pay you dividends in the long-run.

• Kim Kelly is a regional technical advisor and vet with MSD Animal Health.

For helpful videos and fact sheets which expand on the information in this article visit www.topfarmers.co.nz, a reference library of industry best practice for some key animal health management areas.

Spot cycling cows in a flash and improve in-calf rates

When Shaun Gardner did his homework on full autumn calving last season, he realised he'd need every heat detection advantage.