Growing a leafy vegetable for cows could reduce N leaching 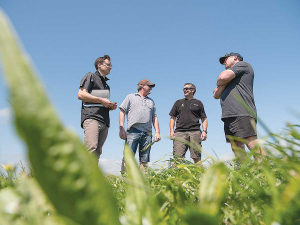 Incorporating certain varieties of plantain into a cow’s diet has been shown to reduce the nitrogen concentration in their urine, which can leach through soil into groundwater.

To test the benefits in local pastures, DairyNZ has been leading the Tararua Plantain Project in the lower North Island, where farmers have been growing the leafy herb for their cows. The Ministry for Primary Industries is also involved as a key contributor.

Tararua dairy farmers Blair Castles, Mark Diamond and Brad McNaughton are already using plantain in their pastures. As System 2 and System 3 farmers and members of the project’s monitoring group, they’re keen for others to learn from their results.

Dannevirke dairy farmer Blair Castles is a farmer on a mission. He says when he found out DairyNZ was suggesting using plantain to reduce nitrogen (N) leaching, he was keen to get on board.

He’s just one of several farmers in the area who are tackling the issue head-on – and sharing their findings with other farmers.

“I like what DairyNZ is trying to achieve and I’m keen to show other farmers what plantain is like in a sward,” says Blair.

“To reach the Horizons Regional Council targets, we have to reduce N leaching on our farm by eight to nine kg/ha. All of us in the region need to get on board and do our best to be compliant.”

Blair has been using plantain, along with chicory, for about six years. He’s looking at taking out chicory and lifting the rate of plantain. At present, chicory is 10% of his sward; plantain’s about the same.

“It wasn’t difficult to establish but it’s been very effective.

“We wanted to use more herbs in our ‘fruit salad’ pasture of ryegrass and clovers. We’ve achieved this and the cows like it. Depending on the trials, we could increase plantain in the future. We’ll do anything we can to be compliant with the council regulations.”

Blair plants plantain in autumn, after the summer turnip crop has been lifted. He has a 15% regrassing programme underway, so it’s early days in terms of results with plantain.

“When I first started using it, I had some concerns around bloat on plantain, which doesn’t happen with chicory. We had to monitor it but so far, we haven’t had any problems. As a precautionary measure we add bloat oil to the drinking water, which covers the clover as well, and this seems to be working well.”

He plants kale in winter and will also add fodder beet to the mix this year.

“We used to grow swedes for our main winter crop, but this year we’re changing to fodder beet on the runoffs and a bit on the milking platform as well.”

Blair tries to keep his use of urea low: about four tonnes per year on the 100ha milking platform. He says this seems to be an effective ratio, so it’s not necessary to pump more on.

“Farmers in the area are being proactive and we have council support, so working with the scientists has to be a good thing – I’m all for it. The One Plan limit-setting process can be quite overwhelming for farmers, but when you’ve got DairyNZ scientists doing this research it’s not so daunting. I’m very happy to help and be part of it.”

Blair’s neighbour Brad McNaughton has already done a few farm trials of his own and is including chicory and plantain in his pastures.

About four years ago he started using ‘Rocket Fuel’ – a mix of plantain and chicory with white and red clovers.

“Plantain did well, so we’re now including it in our regular regrassing programme,” says Brad.

“We’re regrassing about 12% of the pasture a year, incorporating 2kg plantain with 25kg ryegrass and 4kg clover.

“Plantain has deep roots and is drought-tolerant, which is good for us because we’re not irrigated and it can get very dry here in the summer. I’m waiting to see how we go in autumn and whether the cows find plantain less palatable.”

Brad says the monitoring group meets every three months, or before drilling, to gauge what everyone’s doing and share information about the trial.

“Next season we’ll sow in spring. I find you have to be exact with sowing plantain. We spray out with a herbicide after the turnips are lifted and direct drill the seed. “I learned farming through DairyNZ discussion groups and talking to others, but it will be a big step to plant 30% plantain. To some extent, it will come down to cost. Herbs are just another species in the paddock but if the trials are successful, we’ll aim to gradually increase plantain in our pastures until we reach 30%.”

Mark has been using plantain for three years. In a 10ha trial, he’s using about 2kg plantain/ha as part of a mixed sward with ryegrass and clover, which he sows after the summer turnip crop has been lifted.

“Plantain is easy to grow and is part of our ongoing regrassing plan. It’s easier to manage than chicory and the cows love it.”

Mark says farmers know they must make changes but, because every property is different, there’s no ‘one size fits all’ solution.

“We all live in houses of different shapes and sizes with different coloured roofs. Farms are much the same. Brad’s property is completely different to mine, even though we share a boundary fence.

It’s definitely a hard one. Some farms have higher rainfall than others, and there are different options available to help reduce leaching, like off-paddock infrastructure and changes to farm systems – but these all come at a cost.”

Mark is also trying a few other things, like using gibberellic acid and liquid urea, to strategically-reduce N losses and increase pasture growth at times when growth rates are typically low.

This story first appeared in Getting the Basics Right 2021 edition.