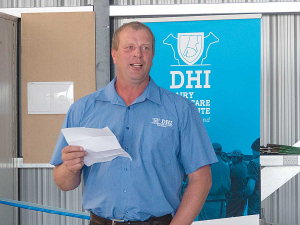 Dutch-trained Fred Hoekstra came to New Zealand 29 years ago and believes he was the only professional hoof trimmer here for nearly half that time.

He runs a hoofcare business, Veehof, at Dromore, near Ashburton, and has now opened his Dairy Hoofcare Institute (DHI) in a purpose-built facility alongside. It will teach hoofcare methods developed in the Netherlands by the Dairy Training Centre (DTC) in Oenkerk and the University of Utrecht.

Veehof has previously offered short courses at various levels, including for Massey University’s veterinary science students, and that will now come under the DHI umbrella. DHI will also offer a diploma in hoofcare, taught to the DTC curriculum.

DHI’s tutors have to be accredited by DTC and re-assessed every three years.

“So it is a probably the most robust training model that I can think of to do here in New Zealand,” said Hoekstra.

Speaking at the formal opening of DHI, Hoekstra said lameness in New Zealand has dramatically increased over the last 20-30 years, despite improvements in laneway construction, and he blames it on the increased intensity of the industry stressing the animals.

“The skill level that comes with dealing with the problems hasn’t grown with it and lameness is one of the major problems. It never used to be, but it’s into the top three of cows’ health issues now (alongside fertility and mastitis).”

Hoekstra said when he arrived in New Zealand he met a farmer trimming cows’ feet with a sharpened breadknife. The modern equivalent might be taking to hooves with an angle grinder with a steel-cutting wheel. The result would be cows lamer than before.

Hoofcare was seen as simple, with people shown it once, trying it on a couple of cows then thinking they were “ready to go”. The reality is that a lot of science goes into it.

“So my passion is to teach people and to be part of the process in getting people to understand it better, [so that they] become better skilled in dealing with lame cows, and also on the preventative side of things. That’s where the DHI really comes in.”

DHI’s slogan is to teach farmers to become better at what they’re doing by raising the standard of hoofcare.

Hoekstra said he wants New Zealand to be seen worldwide as a dairy farming leader.

“I love to see cows being treated better and so functioning better as individual animals.

“I realise that it’s more than just hoofcare that will help us in the dairy industry to reach this high level, but at DHI we can do a little bit from that hoofcare perspective.”