Weaners are faring well at fairs 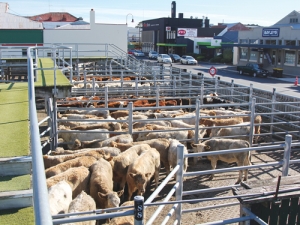 In the past 12 months at least 107,000 weaners have been sold at PGG Wrightson weaner fairs.

Prices have been up at weaner fairs around the country, reflecting the buoyancy of the beef market and the need for many hill country farmers to reduce stock numbers ahead of winter, comments PGG Wrightson.

Traditionally weaner calves were included in general stock sales but farmer demand – as growers and buyers – led to the development of fairs which cater exclusively for weaner calves.

PGG Wrightson Livestock manager Maurice Stewart says at least 12,000 weaners will have been sold at the four weaner fairs the company held at Feilding in the first five months of this year.

“The Feilding weaner fair is one of the larger sales in New Zealand with stock coming from the lower North Island.  Increased numbers this year reflect that many farmers, who would normally carry weaners through to spring but whose pastures were hard hit by the drought, have taken advantage of the record prices and destocked.  There was strong buyer demand from farmers in the lower North Island who have grass or supplements to generate weight gain over winter.

“The average for weaner steers was $3.57/kg, 30 cents higher than last year; this translates to $100-$200 more per calf over prices achieved at the same time last year.  Some pens of heavy steers achieved more than $1000 per head.