A killer worse than M. bovis 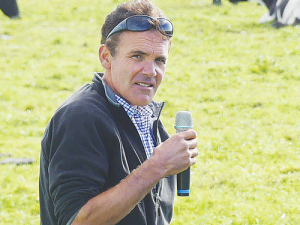 A cattle disease prevalent on 100% of New Zealand farms is much more serious than Mycoplasma bovis, a veterinarian says.

Johne’s was discovered first in Taranaki 100 years ago in one cow, Norton said.

Pre-clinical animals may be “super-shedders” spreading the bacteria in their faeces and colostrum. The disease is highly contagious: a calf exposed to the faeces of a clinical cow is highly likely to be infected.

“I would say Johne’s is on 100% of our dairy farms; it is a silent killer. Where does it rate in relation to other diseases? I would say right up there, maybe even higher than Mycoplasma bovis. It’s killing a lot of cows every day in New Zealand.”

LUDF has run an aggressive anti-Johne’s policy for the past few seasons, calculating that the increased costs of culling and replacement would pay dividends in a lower incidence.

Norton presented figures showing that in the 2014-15 season the farm recorded 18 cows with a positive (suspect) milk test for Johne’s, and culled 15 after it was confirmed by a positive blood test.

Norton said LUDF uses a test offered by LIC which detects MAP antibodies in milk. They cull affected animals early rather than carry them through winter “and having them die on us in spring”.

“What we’re achieving is a breaking of the cycle.”

He advised farmers to get infected animals out of the herd pre-calving, because Johne’s is also carried in milk and colostrum – and pooling colostrum to the calf shed “sets up a perfect storm” for spreading the disease.

Norton said LUDF’s control methods seem to be working, “reducing the actual level of infection in the herd”.

- Test-and-cull of clinical and high risk cattle, to eliminate a major source of MAP before calving and reduce losses from clinical JD

- Biosecurity and buying low-risk stock to reduce the risk of importing MAP into the herd from high-risk sources.