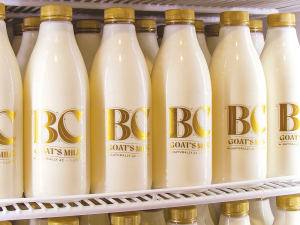 Before Cow goat's Milk is available in 1L bottles.

The 1-litre bottle of ‘Before Cow’ (BC) A2 goat’s milk was launched four weeks ago by Oete Goat Farm, South Auckland. While only available in supermarkets throughout Auckland right now, plans are afoot to distribute the milk to other parts of the country.

Oete Goat owner Matt Bolton says he has been “blown away” by consumer demand for the milk.

“People are getting more educated about the benefits of goat milk, and the product is gaining traction,” Bolton told Dairy News.

BC goat milk’s brand story is simple: thousands of years ago, no one milked cows, Bolton points out. “So when your ancestors needed fuel, the family goat was the source of A2 milk that’s high in vitamin A, naturally homogenised, better for people with cow’s milk intolerance, and better for the environment.”

"New Zealanders drink 400 million litres of milk a year, but with so much pressure being placed on the dairy cow industry, consumers are desperate for alternative milks with less environmental impact."

Bolton has been working on his farm for the past six years to get the flavour tight.

Through selective breeding trials and many tasting sessions, any traces of "goaty flavour" were eliminated. It now tastes just like the cow's milk people are used to drinking, Bolton says.

If anybody turned up on their farm to sample the milk, no onw would notice that it is different from cow’s milk, he says, but that’s where the similarities end.

He claims goat milk is easier on our tummies, easily digested and better for the bowel system.

“We now know that the natural calcium in goat’s milk helps digestive enzymes. While the fat content of cow and goat milk is similar, the fat globules in goat’s milk are smaller, making it easier for your body to digest.

Bolton owns two farms, Oete and Oakdale, where about 5,700 goats are milked daily. For BC goat’s milkproduct, goats are milked at Oete and up to 4,000 litres of milk goes to the Green Valley Dairy plant in Mangatawhiri.

Milk from goats milked at Oakdale ends up at the nearby NIG Nutritional plant and is turned into goat milk powder for export.

Bolton says he has strived to be a flagship for the goat industry and provide an alternative to cow’s milk for consumers. He is thrilled to see the product in 45 Auckland supermarkets.

“To see six years of hard work on the supermarket shelves of New World, Countdown and Pak’nSave is incredible.”

Getting the taste right has been the key.

“In order to change Kiwi dairy habits, taste is king, and the truly special part to BC goat’s milk is the taste. Use it wherever you’d normally use cow’s milk: cereal, coffee, baking, luxurious milk baths like Cleopatra.

Pitchblack’s Jono Key says a chance meeting three years ago led to the collaboration with Oakdale Farm to bring an “amazing product” to market.

“From the brand name, logo, bottle design, supermarket sell-in, to the ATL campaign, we’ve been at the centre of branding and building this product.”

He says Pitchblack (PB) believes in the potential of ‘Before Cow’ (BC) goat’s milk so much that they’ve taken a significant stake in the Oakdale Farm.

Bolton says, “The PB team have become my marketing team and business partners and we’re looking forward to changing the face of NZ dairy.”

Bolton says Oete and Oakdale farms have managed through redesigning of farming practices, testing and monitoring soils to reduce nitrogen loss to 11kg per hectare.

“Our goal is to reduce this nitrogen leaching to less than 10kg N/ha,” he says.

For their environmental efforts, Matt and his wife Sarah won the Auckland region supreme award in the 2020 Ballance Farm Environment Awards.

A farm manager and nine fulltime staff contribute to the success of this goat farming operation that involves pasture being cut and carried daily to feed milking goats. About 85% of the feed comes in the form of freshly cut grass.

To boost protein when required, brewer’s grain is fed to the animals.

Bolton says animal welfare is a top priority. “We ensure our milk comes from goats who live a very happy life on the farm.”

New Zealand's dairy goat industry has the potential to deliver $480 million in economic contribution by 2024.