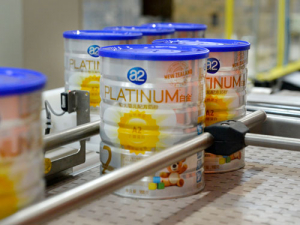 Synlait announced yesterday that a2MC has increased its shareholding in Synlait, from 9.11% to 17.39%.

“The increased investment from a2MC reflects an increasingly close relationship and long-term commitment from both organisations to the continued growth and success of their partnership,” Synlait Milk says.

The announcement came a day after a2MC and Fonterra jointly launched Anchor a2 fresh milk in New Zealand.

The two milk processors are also looking at processing infant formula, butter and cheese from A2 milk. Synlait is the currently the sole manufacturer of A2 infant formula milk powder for a2MC.

The Dutch co-op took a stake in Synlait when it went public in 2013, buying shares at $2.20 apiece in the float, but signalled a change of tack in the investment when it didn't acquire further stock in a capital-raising.

Milk company A2 has announced a net profit of $386 million, a 34% increase over the previous financial year.