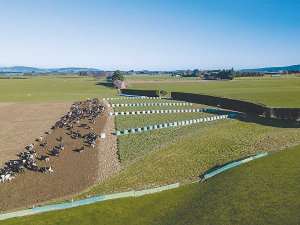 In another twist to the ongoing winter grazing saga in Southland, Environment Minister David Parker and Minister of Primary Industries Damien O’Connor met with a group of Environment Southland council executives, farming and sector leaders and Fish & Game to try and find ways of resolving the impasse over the implementation of the new freshwater regulations.

The meeting of ministers and other interested parties was apparently organised by a group of local farmers who wanted to voice their concern over some aspects of the regulations. Federated Farmers representatives, including Bernadette Hunt, were present, but they did not initiate the meeting. She says the farmers who called the meeting voiced the same concerns that they have making to Minister Parker.

During the meeting, there was an agreement to form a local advisory group to be facilitated by Environment Southland, which would provide advice into the national implementation group established by Minister Parker last week.

Environment Southland chairman Nicol Horrell said the meetings were very constructive and he looked forward to working with the ministers further as they worked through the new legislation. He says everyone wants to ensure water quality in the region is improved.

“The ministers acknowledged the progress that’s already been made here in Southland with farm plans [for] intensive winter grazing,” he says.

One of the farmers present, Tony Cleland, a farmer and chairman of FMG, says while the process has been challenging, the group has established a pragmatic way forward, thanks to collaborative input from farmers, industry groups, council and ministers. He says it’s encouraging that a local group of farmers will be working with Environment Southland on the rule changes.

“The conversation was constructive and we will continue to work, as a group, on this issue as we seek solutions as a sector. We see the implementation groups and councils as key in the rollout of these regulations,” he says.

But what is not clear is just who will be on the new group, its power and how this will affect the individual advocacy of Federated Farmers and other industry groups.

The new rules around winter grazing – especially in Southland – are rapidly becoming an election issue.

New water rules are coming — ready or not!