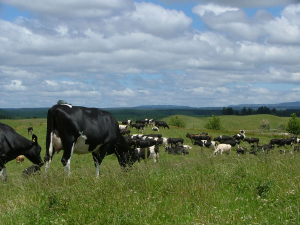 In a New Zealand first, new research from Lincoln University PhD Researcher Hafiz Muhammad Abrar Ilyasestimates the carbon footprints (CO2) of our pastoral, or grass based, and barn dairy systems based on their energy consumption.

This study was carried out on 50 conventional dairy farms in Canterbury- 43 pastoral and seven barn systems.

Hafiz said the difference between the two systems indicated that the barn system has an 18% higher carbon footprint than the pastoral system per hectare of farm area, and 11% higher footprint per tonne of milk solids.

Barn dairy systems have been a relatively recent introduction in New Zealand as a solution to animal welfare, soil structure damage and wider environmental challenges.

“The use of barn facilities, however, requires further intensification of the system, in terms of the use of energy inputs to make the system profitable, making it difficult to achieve both financial and environmental benefits simultaneously”.

He said the greater carbon footprint of the barn system was due to more use of imported feed supplements, machinery usage and fossil fuel (diesel and petrol) consumption for on-farm activities.

In the pastoral system, a significant contributor to emissions was the use of fertiliser.

He included emissions released during the production of materials used for manufacturing of indirect energy inputs (fertilizer, machinery and equipment) which, he added, were rarely considered.

“What is not accounted for is overseas production and import of these inputs to the agricultural sector.

“As production of imported feed supplements involves fossil energy consumption and releases CO2emissions into the atmosphere, it is considered as an indirect source of carbon emissions in this study.”

The same is true for fertiliser.

The use of imported feed supplements is higher in the barn system due to the higher stocking rate and more intensive nature of the system.

In addition to that, the use of barn facilities increases stocking rate and input consumption to produce more milk per cow. This in turn has increased the cow size (weight), increasing methane emissions per cow, as bigger cows produce more enteric methane due to their higher feed intake.

Based on these other greenhouse gases (CH4, N2O etc.) and their environmental impacts, a number of worldwide studies have recommended the pastoral system as the ultimate solution to environmental challenges such as climate change rather than the barn system.

He said, in New Zealand reducing environmental emissions from farming systems is a critical issue for the dairy industry.

“Although CH4emissions from enteric fermentation and N2O emissions from soils make up the majority of GHG emissions from agriculture, energy use within the agricultural sector directly in terms of fuel combustion and indirectly through the increasing use of synthetic fertilizers and other inputs is also of concern.

“It is also an area that is perhaps more easily addressed.

“In this regard, minimising carbon footprints associated with energy consumption will be helpful to achieve New Zealand’s emission reduction targets and will also help to reduce overall greenhouse gases HG emissions from dairy systems and move towards more climate friendly or sustainable farming systems,” Hafiz concluded.