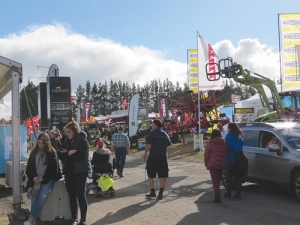 Fieldays 2016 has come and gone, and the weather was kind – cool mornings and a little seasonal Waikato fog.

Scanners at the gate recorded 130,684 visitors, apparently walking out with their arms full of purchases, as suggested by the $1 million withdrawn from cashpoints.

Despite townie journalists predicting tough times and chequebooks staying in desk drawers, exhibitors reported most people talking positively about the future. Yes, the dairy sector appeared to be window shopping and creating a wish list, but other sectors put pen to paper as they agreed to deals.

Power Farming Group marketing director Brett Maber reports, "we decided to buck the trend a little and increased our budget for the 2016 event with a retail presence on the site and the Power Farming HQ bar in the central city. We attacked the event with a positive attitude and a quick roundup of enquiries shows us the event was probably as good as we have seen for many years".

John Deere NZ manager Mark Hamilton-Manns, also the president of the Tractor & Machinery Association of NZ, comments, "we had great enquiry on the full range of ag products for the first three days, then switched to turf-care and residential products on Saturday".

"We saw strong compact sales and formed the impression that ag customers were looking for reliability, good parts, service support and known repair and maintenance costs.

"We also had a lot of interest from contractors and earthmoving operators in the JD 624K loading shovel we showed for the first time."

"We had huge interest in the Lely Astronaut A4 robotic milking system, and the Lely Calm automatic calf feeder drew attention and resulted in sales, with many farmers looking to simplify their calf rearing operation."

And Fieldays is firmly a major showcase for the motor industry, which doesn't have its own event; it chose Fieldays for its remarkably wide audience.

The choice was mind-boggling: utes, wagons and saloons, and even a peek into the future with a few concept vehicles on show.

Isuzu Utes NZ spokesman Gareth Lowndes was chipper about the company winning the Fieldays Award for the Best Customer Interactive Experience – a challenging drive around a test track built into the slope of the site.

While most exhibitors were positive about the whole event, others expressed frustration at the Fieldays management's fixation on gate numbers, which includes much of Hamilton's school population on the Friday.

An industry stalwart said, "it's really only a two day show for us, with the hordes of children climbing over machines distracting serious buyers. Perhaps we need a trade-only or VIP day – a strategy of many European trade fairs."

But one thing's for sure: the event continues to capture the imagination of the NZ rural sector and does well at bringing urban and rural folk together, which must lead to better understanding of an industry often portrayed in a poor light by mainstream news media.