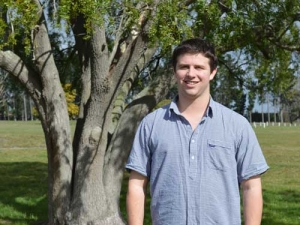 A Northland teenager says being part of a TeenAg club at high school kept him in school longer than he had intended, and opened him up to new possibilities in the primary industries.

The TeenAg club format was developed by New Zealand Young Farmers as a way for younger people to get started with the movement.

Young Farmers are taking a “pipeline” approach, explains NZYF chief executive Terry Copeland, developing a format to suit each age group around the Young Farmers set-up. New Zealand Young Farmers has existed for more than 80 years and is for people aged 16 to 31.

The work was initially part of the 7-year Transforming the Dairy Value Chain Primary Growth Partnership (PGP) programme, which is co-funded by the Ministry for Primary Industries, and is now also being funded by another PGP programme, the Red Meat Profit Partnership.

Copeland says the overall aim is to help more young people understand the potential opportunities in the primary industries. Along with the TeenAg clubs for 13 to 18-year-olds, Young Farmers have set up AgriKids clubs for 8 to 13-year-olds.

The format has worked well for Sam Moscrip. The teenager and his year-12 classmates were encouraged to take part in a TeenAg regional final by their Agriculture teacher at Kamo High School. The group made the top three in the regional final and took part in the grand final event in Dunedin, where they placed in the top seven.

Moscrip says that it was through this that they discovered the TeenAg clubs and set one up at their school. It took off. “We got a pretty strong membership base pretty quickly: it grew to about 35 members within a month.

“We streamlined meetings to keep them short and sweet, and we focused on getting out seeing farms and getting in guest speakers.”

Moscrip says the club attracted more than farm boys like himself. “At one stage we had a club with 40 financial members and only two of us off farms. That was the light bulb moment, when we realised we must be doing something good.”

The local paper began calling regularly to find out about their next events, and they developed a relationship with the local Whangarei A & P Society, which led to combined activities.

Moscrip says the club had some profound flow-on effects. “I was planning to leave at the end of 2012, because I was sick of school really and I was going to work at home on the farm. The TeenAg club kept me at school for year 13, and it has opened heaps of opportunities. I still want to go farming, but now I’m doing an AgComm degree at Lincoln University – so having that degree and also a network of contacts will make a big difference to the way I do things.”

He says the TeenAg involvement on his CV has also helped him gain scholarships to fund his university studies.

Moscrip has continued his involvement, joining the Young Farmers club at Lincoln and helping to make it appealing for fellow students. He’s now chairman and the club has grown from 45 members to more than 70.

For those that “age out” of Young Farmers, there is a next step in the form of the Rural Business Network, says Copeland.

“This is for people who are in their own farming business or are in a management position on a farm, or rural professionals, such as bankers, vets and salespeople.

“It gives them a chance to network and also access to some continuing education. The blended membership means there’s a diversity of opinion and outlook, and there are stimulating discussions about key issues, for example freshwater management.”

Copeland says involvement with Young Farmers is not limited to rural areas; they are also trying to encourage young people from urban areas. “Any teen with an interest in science or technology, for example, could have an interesting time in a TeenAg club,” he says.

Financially-savvy students are applying for a raft of agri-food scholarships to help cut the cost of university study.

Trip of a lifetime beckons

Two students from Southland Girls’ High School have been selected for the trip of a lifetime to the US.

Thousands of cows shifted, dried off

At least 7000 dairy livestock have been affected in the recent storms in Waikato and Bay of Plenty alone and hundreds of hectares of pasture and maize crops have been damaged, DairyNZ reports.

Eyes in the sky

A pilot's perspective on the latest aerial spreading research from Ravensdown.