Celebrity chefs ready to cook up a storm 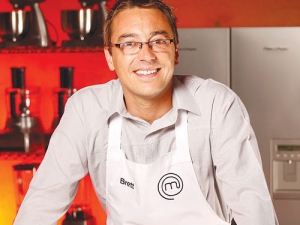 Brett McGregor will be at the Fieldays.

The Fieldays Kiwi's Best Kitchen will be a hub of delicious creativity during the four-day event.

Celebrity chefs Neena Truscott and Belinda MacDonald, Brett McGregor, Michael Van de Elzen and Chelsea Winter will take the stage in the Kitchen Theatre to show visitors how the masters do it. Allyson Gofton will make a special appearance.

"We're thrilled with our selection of chefs this year, and excited that Allyson Gofton will make a guest appearance," she says.

"Every year we look to who is popular with our visitors and who is doing something different in the kitchen that particularly relates to good, wholesome Kiwi food.

"Seating in the Kitchen Theatre is always full so we recommend people get to the demonstrations early so they don't miss their favourite cooking celebrities."

On Wednesday, 2015 My Kitchen Rules winners Belinda MacDonald and Neena Truscott will open the demonstrations in the Kitchen Theatre. With a holistic approach to their cooking ethos, the Cambridge locals have a focus on nourishing and delicious seasonal foods, while also keeping their recipes gluten and refined-sugar free.

Thursday will welcome 2010 Masterchef winner Brett McGregor for his second year in the Kitchen Theatre. A well-seasoned traveller, McGregor's passion for trying new flavour combinations translates to tasty and easily accessible meals. Judging the Fieldays Rural Bachelor culinary efforts will give him his first challenge before he demonstrates his own distinctive cooking style.

Saturday sees one of NZ's favourite chefs and 2012 Masterchef winner Chelsea Winter take over the Kitchen Theatre to share her 'simple made special' philosophy.

Gofton will take the stage on Saturday at 2.15pm in a special guest appearance, thanks to Fieldays Society partner Hyundai.