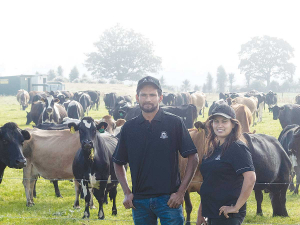 Dinuka and Nadeeka Gamage were named the region's Share Farmer of the Year winners at a recent awards dinner. It follows Dinuka's third place in the Dairy Manager category in 2016.

The Gamages says the networking, strength and weakness identification - as well as the recognition they gain - through the awards process are what motivated them to enter again.

It was part of their overall plan, adds Nadeeka.

Dinuka Gamage has been in the dairy industry since coming to NZ from Sri Lanka in 2008. Nadeeka joined him with their two children two years later. He worked one year on a farm at Kaikoura, and about eight years at Culverden. They are now in their fourth season as contract milkers on a Dairy Holdings farm at Ealing, just north of the Rangitata River.

Dinuka holds a National Diploma in Technology (Agriculture Engineering) and a postgraduate diploma in Marketing from Sri Lanka. In New Zealand, he has earned a diploma in Agribusiness Management, Primary ITO Level 5 Production Management.

Nadeeka holds the NZ Certificate in Early Childhood Education and still occasionally works locally as a teaching aide, although less so as the farm takes up more of her time.

"Agriculture has always been our career of choice. We love working outside with animals and nature," say the Gamages. "It was challenging, at first, to learn the skills required to be a NZ dairy farmer, but we have over come that through continuous education and experience."

They say their goal is to continue to grow their business, while protecting the environment through sustainable farming.

The Gamages won $10,250 in prizes - plus two merit awards, the Federated Farmers Leadership Award and the Westpac Business Performance Award.

Dinuka doesn't put the win down to any one thing, but to 13 years of learning, from his start as a farm assistant.

The Gamages say they make a point of setting goals and strategising their progress. They believe that it's important to understand the business both from their own point of view and that of the farm owner.

Their ultimate goal is farm ownership, but Nadeeka says they are currently on track with a five-year plan to go 50:50 sharemilking.

They also credit strong support from the farm owners as a strength of their operation. They already own some animals and lease more from Dairy Holdings under a scheme which they say gives them the opportunity to progress and is a big reason they are happy to be part of the Dairy Holdings stable.

The 245ha farm carries 980 cows in two herds, one consisting of the younger and lighter animals and another of the older cows, all spring calving.

This season they achieved a 74%, six-week in-calf rate.

Their farming operation is a fully grass-based system with no outside supplements and is largely self-contained - apart from winter grazing on another Dairy Holdings block. At the moment, the Gamages are feeding silage made on-farm, to help keep the cows milking through the autumn slow-down.

Since January 1, they've been milking 16-hourly, through the farm's 48-bail rotary shed.

A North Otago dairy farming family have created an on-farm oasis that allows visitors the chance to cool off in the hot summer months.