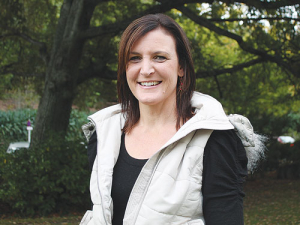 A key contributor to the dairy industry for 20 years, Justine Kidd, was awarded the New Zealand Order of Merit in the New Year Honours for services to dairy and equestrian last month.

Kidd, BAgSc (Hons), who lives in Takapau, is the immediate past chair of Dairy Womens Network and was Dairy Woman of the Year in 2013.

“As chief executive of BEL Group Dairy Farming, milking 9500 cows and employing 65 people, she led through the upheaval of an owner’s death to establish it as a successful family owned corporately structured farm business.

“Alongside establishing Kitahi, a Hawke’s Bay farmers’ collective, she is a shareholder in her own dairy farming business, seeking opportunities for primary producers to grow product value and market access and providing strategic consulting to business projects such as the Organic Dairy Hub and the Dakang New Zealand farm business.

“She worked with Bank of New Zealand to develop their Farm First Growth Programme and DairyNZ in creating a farm governance programme.”

Last November she took up the position of chief executive of Milk NZ Management which includes Purata Farming in Canterbury and Theland Tahi farms through the North Island, milking about 26,000 cows.

She is chair of the Agricultural Leaders Health and Safety Action Group, a primary sector initiative to support creating ‘Healthier, safer NZ farms’.

Kidd was a founding director of Synlait and started Avance Ltd, a company designed to create a family farming asset by helping other farm businesses achieve their goals.

Kidd told Dairy News when she won Dairy Women of the Year that she likes to help farming families who make a massive contribution. And she wanted to build bridges across the urban-rural divide.

She was in China las week and could not be reached for comment.

She has also held governance roles with Eventing NZ, Equestrian Sports NZ and Horse of the Year HB Ltd.

Former DairyNZ chairman John Luxton has been made Companion of the Order of New Zealand (CNZM) for his services to the dairy industry.

Luxton oversaw the development of DairyNZ, stepping down as chairman last year, having held the position since 2008.

Luxton was also an MP from 1987 to 2002 and held many Cabinet portfolios including agriculture, housing and commerce. He played a key role in many important policy and legislative changes, including the foundation policy work that led to the formation of Fonterra and the deregulation of producer boards.

Luxton is a former chairman of Tatua Co-op and a founder of Open Country Dairies and Kaimai Cheese companies.

Meanwhile Gore farmer Laurie Paterson has been awarded an ONZM for services to the beef industry.

They have about 200 stud Hereford cows and supply bulls to commercial beef clients and the dairy industry.

In the 1980s he introduced the Breedplan genetic evaluation software, which calculates estimated breeding values, to Hereford breeders and this eventually led to its use for other breeds in NZ and the combining of NZ data with Australia for trans-Tasman genetic evaluations.