Demand a nose ahead of supply in global market 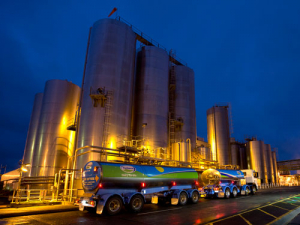 Supply of milk is under a cloud, especially in New Zealand: October collection was down 215 million kgMS or 2.2% on the same month last season.

While milk supply is down, prices for whole milk powder on the Global Dairy Trade (GDT) auction have hit their highest level in three years.

Fonterra chairman John Monaghan says the co-op has continued to earn good prices for its milk.

“The higher price reflects a global dairy market that is tipped slightly in favour of demand,” he said.

“On the demand side, Global Dairy Trade prices have increased by about 6% since our previous forecast. Whole milk powder (WMP) prices, a key driver of our milk price, have hit their highest level since December 2016.

“At this stage of the year, we have contracted a good proportion of our sales book and that gives us the confidence to increase the mid-point of our forecast farmgate milk price range by 25 cents.”

Monaghan says farmers will welcome what would be the fourth highest milk price in Fonterra’s history. It would represent a $11.2 billion cash injection into NZ communities.

Fonterra says October began with colder and wetter conditions than usual across most regions which has seen milk collections reduce. However, recent warm weather could see a recovery in the first half of November.

Weather conditions across most regions were wetter than usual and the main contributor to the decrease in October collections.

South Island milk collection in October was 86.6 million kgMS, down 2.6% on last October.

Season to date collection is 185.1 million kgMS, down 1.8% on last season. Wet and cold weather has South Island collections down on last year.

The Southland region has had pasture damage due to sustained wet conditions. Canterbury collections are in line with last season.