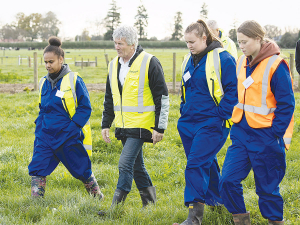 Agriculture Minister Damien O’Connor says the industry must tweak the way it attracts and appreciates workers.

Speaking at the recent New Zealand Dairy Industry Awards, O’Connor said the industry must “tweak” the way they look for, retain and appreciate workers.

“We have to try hard…if we are the best industry then people should want to come and be part of it,” he says.

O’Connor also had a message for the dairy sector seeking more spaces in managed isolation and quarantine (MIQ) spaces for overseas workers.

“It’s not possible at this stage just to open the doors,” he says.

“We’ve all done an amazing job to keep Covid at bay. That investment can’t be put at risk in a rush to open our borders.

“We will be cautious but I appreciate the pressure that is out there across the industry.”

O’Connor had some nice words for the dairy sector.

“This is the biggest and best industry in our country. Sunshine, rain, a bit of soil and we produce protein and food for the world. And, we have done it very very successfully.”

Federated Farmers vice president Chris Lewis says improving working conditions has been “a work in progress” for many years.

Lewis told Dairy News that every industry has some bad apples but claims the bell curve in the dairy industry when it comes to working conditions is shifting pretty quickly.

Lewis says the Government must not use “patsy excuses” to deny dairy industry more spaces in MIQ facilities for overseas workers.

He thinks the Government has reduced MIQ spaces and with many industries fighting for places, it is picking winners.

A recent DairyNZ survey showed that 87% of farmers surveyed had made changes to make their business more attractive to staff. These changes included improved rosters to give more time off (42%), reduced hours of work (34%), flexible milking schedule (23%), increased salaries and wages (65%).

To put more pressure on the Government, farmers are being asked to email the Prime Minister Jacinda Ardern, Immigration Minister Kris Faafoi and O’Connor to highlight issues relating to worker shortage on their farms.

Farmers are being told the Government has signalled that they don’t think the industry needs migrant workers to help on our farms.

“We strongly encourage all farmers with a staffing shortage because of the restrictions on migrant labour to write to the Government and let them know,” says Lewis.

This month the Government denied an application by Federated Farmers and DairyNZ to bring in 500 skilled migrants to work on dairy farms. It also approved 125 agricultural machinery operators, way below the 400 that is needed.