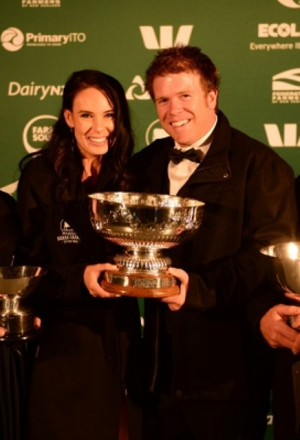 Northland farmers Daniel and Gina Duncan are the 2018 Share Farmers of the Year.

The former registered land valuers are 50:50 sharemilkers for the Pouto Topu A Trust. The 460ha property on the Pouto Peninsula,at the northern head of Kaipara Harbour, milks 1020 cows.

After picking up the Share Farmer of the Year title Daniel Duncan told the 500 guests that he would be celebrating hard.

“I don’t get on the piss very often but I’ll make an exception tonight,” he said.

Both Daniel and Gina, aged 32, hold Bachelor of Applied Sciences majoring in Rural Valuation and Management, with Daniel holding a double major including Agriculture.

The judges noted that the Duncans have clear, realistic but challenging goals and gave an outstanding presentation which flowed and kept the judges fully engaged.

The judges said they “managed to get that information across to us in a way we could understand and follow it”.

Dream big and work hard to achieve it, says the 2021 Dairy Farmer of the Year, Christopher Vila.

A rural sector stalwart and mentor to many has been recognised for his contribution to the New Zealand Dairy Industry Awards programme.