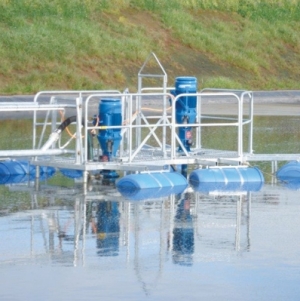 HAVING ADEQUATE storage to stop effluent being sprayed on to pasture at the wrong time is starting to become the new normal for Waikato dairy farmers, says the author of a report to Waikato Regional Council's environmental performance committee.

"Ensuring they have adequate storage so that effluent isn't irrigated to pasture when the ground is too wet to soak it up is crucial to protecting our waterways," says compliance and education manager Rob Dragten.

"Irrigating at the wrong time risks effluent running off into rivers and streams, filling them up with bacteria, sediment and nutrients that can cause algae."

Dragten says the council's collaborative work with farmers and agriculture organisations, such as Fonterra and DairyNZ, was now starting to pay dividends for the environment.

"We estimate that if the average Hauraki dairy farm doesn't have enough storage to avoid irrigating over crucial winter months some 600,000 litres of effluent per property will run off to waterways that empty into the Firth of Thames.

"Given there are hundreds of dairy farms on the plains, that would translate into many millions of litres of effluent a year getting into waterways in that area alone. And, in one round of farm visits recently in the wider region, we found more than a quarter of farms had no storage at all.

"So the efforts of many farmers and their industry organisations in Hauraki, and elsewhere in Waikato, to expand the amount of effective effluent storage in recent years are to be applauded. Having the right size storage for their property is becoming the new normal for many of the region's dairy farmers, and good on them," says Dragten.

His report said compliance with regional effluent rules in the early 2000s was low, with many effluent management systems inadequate to prevent contamination of waterways.

In the last 10 years there had been substantial progress and it was now rare to see "blatant, long-standing issues" of the type that could cause particular problems with waterways and groundwater.

Lack of suitable effluent storage remained the biggest challenge but "the number of farms making this investment continues to grow and overall this change appears to be gaining momentum", the report said.

The process of change had been helped by the dairy industry investing substantial resources into helping farmers comply with rules and lift their environmental game. The council has also been working one-on-one with farmers in areas with soils which present a greater risk of effluent getting into waterways or groundwater. If required, the council advises farmers to seek commercial advice on the right type of storage upgrade and gives them a timeline to implement improvements so that they can comply with rules 365 days of the year.

"The farmer response to this approach continues to be very positive," says Dragten.

He says some farmers questioned the environmental benefits to be gained from spending significant amounts on effluent storage upgrades. "But our figures show there is a real risk of very large concentrations of effluent getting into waterways if storage capacity is inadequate. That's not helpful to the environment generally nor to our clean, green image on world markets. So storage upgrades are a genuinely worthwhile investment all round.

"We're prepared to give farmers time to get appropriate advice on the best options for the storage of effluent on their properties. Advice should be taken from an industry-accredited dairy effluent systems designer.

"Increasingly the expectation of the dairy sector is that farmers need to make sure they comply with regional environmental protection rules.

"The council won't shy away from taking appropriate enforcement action if people damage the environment because of a lack of adequate storage or inappropriate management," says Dragten