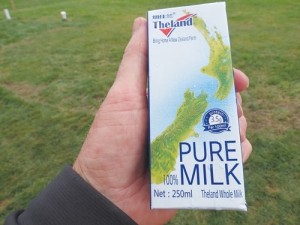 Milk from Shanghai Pengxin farms are processed by Miraka for China.

The no-show of El Nino has been a boon to farmers supplying Miraka, the Maori owned dairy company located near Taupo.

Chief executive Richard Wyeth says farmers are doing well for grass, but are challenged by the milk payout. His main concern now is the farmer suppliers and how they are coping.

"Suppliers are doing everything they can that's in their control. One told me recently that he was looking to strip costs out wherever possible. Obviously they are going to keep farming but they know that the future of the payout is not great short-term so they just need to pull back on expenditure."

Wyeth says production is down 7% on budget and he expects this trend to continue into next season. It results from farmers reducing cow numbers and feeding fewer supplements to cows during the peak.

"Ironically while production for the season is down, we've had the highest milk output ever for this time of the year. We've had a fantastic summer-autumn. People are still cutting silage which for this area is unheard of."

Wyeth says there is plenty of evidence that farmers are returning to pasture feeding and are using fewer supplements.