Farmers are the ‘new Maori’ 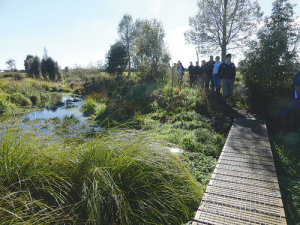 “You are on this whenua; you are developing a product that feeds the world and therefore feeds your own family. It’s an intergenerational lifestyle that probably you didn’t choose – it chose you.”

Ramsden was speaking at a recent shed talk for farmers on mahinga kai – the concept of traditional Maori food resources, their cultural values and their place in the ecosystem. About 60  people gathered at Five Springs Farm, Springston, to hear Ramsden explain the concept.

He said ECan defines mahinga kai as “what sustains and nourishes the human body – clean water, clean kai, clean air, sufficient shelter, access to and being able to gather kai as our ancestors did, in a sustainable way for future generations”.

Farmers in the cultural landscape/values management area of the Selwyn/Te Waihora zone are asked to take mahinga kai into account in their resource consents. The area includes Te Waihora/Lake Ellesmere, Muriwai/Coopers Lagoon and their margins and wetlands, and strips 20m each side of 13 rivers that drain into the lake.

ECan asks affected farmers, as part of their resource consent process, whether they agree to an additional mahinga kai management objective and targets in their farm environment plans (FEP). If they accept, their farming practices will be examined to see how well they are addressing the mahinga kai objectives during FEP audits.

In an impassioned speech, Ramsden described the intimate relationship between Maori and the land and its resources – from the fish off Banks Peninsula, the breadbasket of Te Waihora/Lake Ellesmere and its wetlands and tributaries, to the whitebait and pounamu of the West Coast.

He said his 15 months in the job had been a learning experience during which he had been “incredibly humbled” meeting the farming community.

“I can’t even put a percentage on it; probably 99.99% of farming – families, community groups, industry groups -- have been incredibly embracing of this mahinga kai concept.”

Mahinga kai is about education and development, he said.

“It’s about a reciprocal relationship. It’s not about Ngai Tahu wanting to come in and stamp their authority on your land, take a percentage of your income or anything like that. It’s about food, it’s about mana, it’s about us a people. We’re here to help each other, not to be divisive.”

The owners of Five Spring Farm, Richard and Jill Simpson, have embraced the concept, fencing a large area of natural springs and planting them in native vegetation. They began this 15 years ago,  supported notably by the Canterbury Waterway Rehabilitation Experiment (Carex) run by Canterbury University. The springs are now preserved in perpetuity under a QE2 covenant.

Carex-designed sediment traps in the springs are used to research methods of cleaning up waterways.