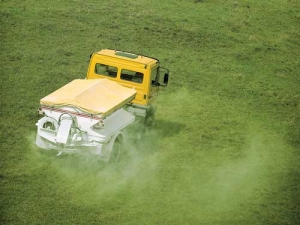 Ballance Agri-Nutrients is holding nitrogen prices to help shelter customers from the drop in the dollar.

“We know this is a crucial period for pastoral farmers, and with nitrogen a key feed source in farm budgets we are doing our best to help out where we can and support our customers to plan their feed requirements for spring,” says Ballance chief executive Mark Wynne.

Ballance science manager Aaron Stafford advises farmers to focus on the nutrient inputs that drive production in the current season or year when planning budgets.

“With talk of an El Nino summer we support a focus on farmers planning early to set up farms up to grow as much feed as possible, as early as possible.  Nitrogen can be used to lift pasture covers and provides the opportunity to harvest surpluses. Potassium is also a very important nutrient that supports clover health, which in turn lifts the feed quality of pastures heading into summer. Where phosphate or sulphur is limited, superphosphate still remains the cheapest way to supply these nutrients.”

Prices of Ballance’s SustaiN and Nrich Urea range remain unchanged.  The large drop in the NZD against the USD has been the driver behind some small price increases in other nutrients.

“The NZD has dropped more than 30% against the USD in the past year, causing price pressures on product sourced internationally. We are conscious of tight farm budgets and we are absorbing some of the impact on our customers, however we’ve had to pass on a small portion of these costs,” says Wynne.

He says that due to the decline in the NZD over the last 12 months, the cooperative is anticipating material price increases in all key nutrient groups in the second half of the financial year.

“We are asking our shareholders to carefully consider this when finalising annual fertiliser plans.”

Ballance at the end of July announced they were returning 94% of the cooperative’s $81 million gross trading revenue to shareholders. The rebate and dividend averaging $60 per tonne totalled $76 million paid on July 31.