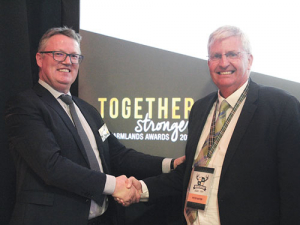 Rural service provider Farmlands has become a major sponsor of the National Fieldays.

It will support key events such as Rural Bachelor of the Year, No. 8 Wire and Tractor Pull.

A three-year partnership between the NZ National Fieldays Society and Farmlands Cooperative Society was announced recently at the annual Farmlands Supplier Awards evening at Lincoln University in Christchurch.

Farmlands brands NRM, McMillan and Gulf Oil are sponsors of other Fieldays Society events – Equidays (October) and The Transport and Heavy Equipment Expo to be held March 2-4.

“We are delighted at this partnership with Farmlands, and the opportunity it presents,” said NZ National Fieldays Society chief executive Peter Nation.

“Farmlands’ brand is well known and trusted by farmers and people working in the primary industry. The Fieldays Society and Farmlands have similar values and passion for innovation and positive change in farming.”

The Fieldays Society was founded in 1968 and will mark its 50th anniversary in 2018.

Farmlands is NZ’s largest farmer owner co-op; it was set up in 1963. It is a top-20 company with a turnover exceeding $2 billion annually.

Farmlands chief executive Peter Reidie says the partnership will benefit farmers, whose desire is “to work together for a better deal”.

In 2016 the National Fieldays generated $430 million in economic benefit for the NZ economy.

There were 1462 exhibitor sites and 130,684 visitors during the four-day event. Last year economists valued the Fieldays brand, which is internationally recognised, at $380 million.

“Farmlands is a leader in its field and together we hope to assist in providing leadership and innovative thinking to transform the future of primary production in NZ,” says Nation.