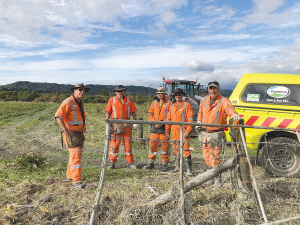 The West Coast may be Westland Milk Products territory but that hasn’t prevented Fonterra from stepping in to help with the cleanup following the torrential rain and flooding of late March.

Working under the direction of Federated Farmers as the lead agency, a five-man Fonterra Emergency Response Team has been in the district since April 2, mainly replacing fencing flattened by the floods.

“Mainly boundary fencing to keep the stock contained within the farm, and laneways to get their animals to either the dairy sheds or runoff or whatever they needed to do.

“We don’t get too tied up with the internal fencing because that can get done at a later date,” he said.

When the Waiho River bridge at Franz Josef was replaced the team was able to move into the area just south of the river.

Lockley says there was “a lot of water” through the farms there because the flood blew out a stopbank.

“Again, establishing the main boundary fences along the road because they’ve basically got none left along that road any more. There’s pretty extensive damage along there.”

The effort was all about helping the community and helping farmers get back on their feet, he said.

Fonterra is thought to be the only dairy company in the world with its own Emergency Response Teams.

Fonterra had 98 ERT members in 11 teams across New Zealand, available both to respond to any emergency on site, or be sent to any national situation.

Lockley said that many had come from farming backgrounds or had a variety of life skills from previous employment. “We enhance that within our ERT teams and make sure they have upskilled and have the right training to do the tasks ahead of them.”

Members also had Urban SAR qualifications which meant they could work directly under Civil Defence direction.

Fonterra teams were among the first on the ground for both the Christchurch and Kaikoura earthquakes. They have also helped with repairs following the 2016 Edgecumbe flooding, a damaging wind storm in Taranaki, and Australian bushfires.

For the West Coast deployment, they chose members skilled at fencing.

Lockley, who is from Taranaki, is leading the team himself, and is joined by two from Clandeboye, near Timaru, and one each from Tirau and Waitoa in the Waikato/Bay of Plenty.

Team members continue to be paid by Fonterra during the deployment, while the farmers provide material and equipment.

Lockley said there were pockets of damaged farms spread right along the coast.

As this issue of Dairy News went to press, the team aimed to have a look at the Fox area and possibly as far south as Haast.

“We’ll see how we go this week because obviously we’ll have to give the guys a bit of a rest – they’ve pretty much worked most days, all day, so it’ll be time for break over Easter then we’ll re-evaluate what we do from there.

“The farming communities down here have been very grateful for the help.

“We’ve got a good team working with Fed Farms and it’s ticking along really smoothly.”